UPDATE – Effective January 2022, this group will meet every other Monday, beginning on January 2.

Currently – 6:00 pm On the second and fourth Mondays of every month

The World:  Gotham City is as it has always been, dark, gritty, crime-ridden and nightmare filled. Home to organized crime, chaotic evil, and a small group of those sworn to protect the city from these forces, it is a place where factions clash under cover of night.

The Batman Miniature Game by Knight Models puts you in the center of this ongoing conflict, with beautiful and dynamic sculpts of the iconic DC characters you know and love from decades of comics, movies, TV shows and more.  Take up a faction from the batman mythos, like the mysterious Court of Owls, The Joker’s merry band of misfits, the dangerous ladies of Birds of Prey, or the Bat-crew itself. Will you help Bats keep the city safe from nefarious plots, or will you turn to a life of crime in this art-deco madness?

Gameplay: This miniatures combat is a skirmish level game designed for two or more people. You’ll pick a faction representing your favorite heroes and villains, plus the henchmen and free agents who follow them through their adventures. A typical crew often consists of five to seven miniatures, with games taking place in a 32″ x 32″ area representing a sector of Gotham City. Reenact your favorite battles, or create your own conflicts in one of the most iconic settings in pop culture. 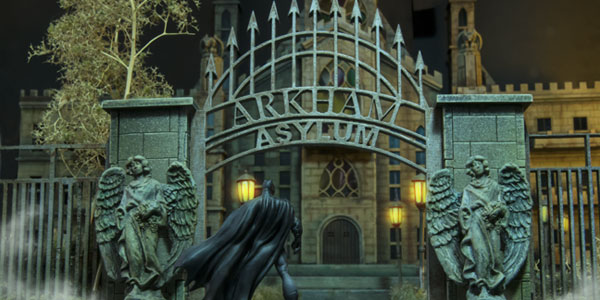 Casual:  Stop by and join in, or request a demonstration! Feel free to take a look, ask questions, and watch a match if you’re trying to decide if you want to get into this fun comic book skirmish game. As the group gets back into the swing of things, tournaments or other special event days may be scheduled as well.

What to bring:  While Noble Knight Games provides an array of appropriate terrain free to use, you will need to bring your own miniatures and materials such as objective cards, character cards, dice, rules, suspect markers and so forth. The new Batman Miniatures Game app has all of the crew building, rules and cards on it, but does not yet have in game tracking and objective cards.

Join the community of Madison area players duking it out in the streets of Gotham! While not required, giving the group a heads up that you plan to attend and play can help make game setup smoother and faster.

Head over to the Batman Miniatures Game – Madison WI  Facebook group for more info and to join the crew.

We hope to see you soon at Batman Miniature Game night!

Test your mettle against other regional Magic players. If you rise to the top at Noble Knight Games, you'll receive an invite to the Regional Championship!