Three Wargame Preorders To Reserve for 2022

We’ve got three publishers and three wargame preorders to share—and a subtle recommendation to pick them up before they’re all spoken for!

1812! War on the Great Lakes Frontier 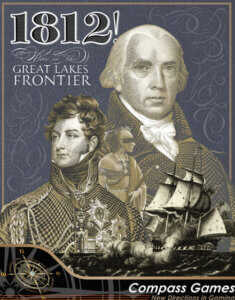 Europe had been engaged in a war with Napoleon’s France for nearly ten years when the United States thought the time was right to pluck the jewel of Canada from the Crown of one of the mightiest powers on Earth, Great Britain.

Players will alternate playing Strategy cards, spending Operation Points and causing historical events to occur. Operation Points are the currency used to move and fight battles with military units. The scale of fighting units is regimental and single ship. Each leader, regiment and naval vessel has been researched to determine its relative strength and weaknesses based on battle performance, unit size, and type. With armies rarely exceeding a few thousand men, the forces are manageable and the clashes are skirmishes in comparison to the battles fought in Europe.

Unit density is small, 288 units over 2 maps at 55 square miles per hex. The playing area is a hex-based with a point-to-point feel encompassing the three primary battlegrounds of: Lake Erie, Lake Ontario, and Lake Champlain. There are no overly complicated systems or tables allowing quick and intuitive game play. The game scenarios range from a single map with each player holding one hand of 8 Strategy cards with a 1.5 hour playing time up to the full 2-map, nine-hand campaign averaging a 9 hour playing time. All of the scenarios and the full campaigns are highly re-playable with new experiences in each playing. 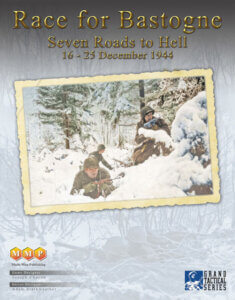 Next on our tour of three publishers and three wargame preorders:

Race For Bastogne is a Grand Tactical Series (GTS) game that covers one sliver in the history of the Battle of the Bulge. On 16 December 1944, the Germans launched their great offensive through the Ardennes.

The XLVII Panzer Corps attacked with the 2. Panzer Division and 26. Volksgrenadier Division, reinforced by the Panzer Lehr Division. Defending was part of the 110th Infantry Regiment of the 28th Infantry Division. It should have been a blitzkrieg through the thin defenses but stubborn resistance, the terrain, and the well-managed commitment of American reinforcements caused the German attack to fail to take Bastogne just as the 101st Airborne Division arrived. Even as German forces by-passed Bastogne to extend the “Bulge,” the 101st was hard pressed to defend the critical crossroads town.

Race For Bastogne simulates the German XLVII Corps attack across the Our River through the 110th Infantry Regiment, the delaying actions by Combat Command Reserve, 9th Armored Division, and Combat Command B, 10th Armored Division, followed by the defense of Bastogne by the 101st Airborne Division. The game covers the night of 15 December to the night of 25 December 1944. The German initially commands three “divisions” and the American two “divisions” on two maps laid end to end. 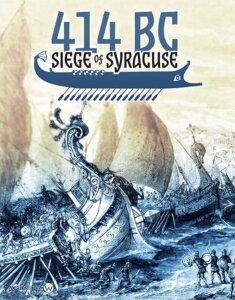 The third and final on the list of three publishers and three wargame preorders:

414 BC: The Siege of Syracuse is the second in Worthington Publishing’s Great Sieges game series. The other titles are 1565: Siege of Malta & 1759: Siege of Quebec.

These games are designed for easy setup, quick game play, and can be finished in under an hour. Game marker placement is shown on the game board. Command orders and cards are used to shorten the rules. Developed for solitaire play, this game requires you to make great decisions based on good strategy, keeping your wits about you when orders do not turn out well, and pressing on to victory.

Game play is centered around using Field Commands to issue orders by the Athenian and Syracusan commanders to defeat each other. Either side can be defeated by their morale falling too low. The game allows you to play either side against a solitaire opponent that has 3 levels of difficulty.

Pick the side you want to be, Athenian or Syracusan, and then shuffle the solitaire card deck for your opponent. The card mix used by the solitaire opponent differs from game to game so no two games play alike.

Each commander (solitaire or player) can issue one order per game turn from their Commands available. Your order is carried out based on your strategy and current situation faced. Your choice can cause multiple actions and reactions with results that cause troop eliminations, morale reductions, and events to occur.

Reserve your copy of these three wargame preorders today!

1812! War on the Great Lakes Frontier

Assembling a crowd of your closest friends, lying to them, and loudly accusing them of betrayal can be more fun than you might think! Although these three game types are often found together, there are various combinations of the three mechanics found in loads of tabletop games!

GMT's award-winning Musket & Pike series began in 2002, and now they're re-releasing the first two games—This Accursed Civil War and Sweden Fights On—for the first time in over a decade! In one box!

Vuca Simulations bring Operation Winter Storm to the table with high player-interactivity and great replayability. The Axis attempt to rescue the Nazi Sixth Army which has been encircled by Soviet forces.

5:30pm - This group meets regularly on the 2nd & 4th Friday of every month. Join the Madison Area Board Game MeetUp for a night of casual board...

11:30 am - The 2nd & 4th Saturdays of every month - Dungeons & Dragons organized play with the Madison chapter of The Adventurers League! (Click ...