A follow-up to Mysterium, the award-winning deduction game, Mysterium Park further improves the experience and genre!

I am a huge fan of games like the original Mysterium and Obscurio; these cooperative, art-interpretation games provide great collaboration at the table as you try to decipher the clues you’ve been given. There’s something about the perplexed look of players as you give them seemingly unrelated cards, and those “Got it!” moments when they realize the message! 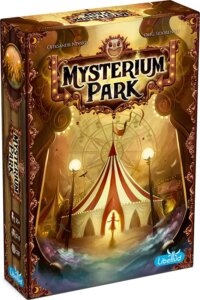 Mysterium Park is the latest in an ever-growing genre of art interpretation games. In this offering, publisher Libellud has tried to streamline the game experience for a faster and smoother game. I find it to be a very successful, simplified version of the original Mysterium that fits in a smaller box for a smaller price!

In Mysterium Park, one player takes on the role of the ghost who was murdered while the other players take on the role of psychics trying to solve the murder. During the game, the ghost will have a hand of seven vision cards.

In the first phase, the ghost is giving Vision cards to the psychics to help them eliminate the innocent suspects from the investigation. The second phase has the ghost giving clues to help players narrow down the location of the murder.

In these first two phases, there will always be three cards remaining that were not eliminated. These will be set aside for the final round. Additionally, there will be one card of the nine to be selected by the players that will be the witness. During the reveal of each round, if a player selects the witness they will be allowed to select again.

Beware though! The ghost and players only have 6 rounds during the first two phases to make the correct selections. All players must be correct by the 6th round or the game is over and all players lose!

If you are all correct, the ghost will be able to advance you to the next phase. The ghost draws a new Plot card to replace the previous one and the next phase begins.

The top row is numbered one to three. This corresponds to a number on the plot card. The ghost will only be able to give two cards to the entire group. One card must match the character card for a clue and the second card must be a clue for the location. These cards are given to the players in no specific order.

Once the cards are given to the players, they must come to a consensus as to which suspect and location match. This is as simple as picking the correct column numbered one, two, or three. However, without an idea as to which clue is referring to which card this can be the most challenging round.

Once the consensus is reached, the ghost will reveal if the psychics were right or wrong. If they were wrong, everyone loses as a group. If they were right, then the players will rejoice with justice served and a Mysterium Park win on their hands!

Breaking Down the Components

The first things you discover when you open the box are the rules and game board. The game board unfolds to a simple three-by-three grid. A basic round tracker (game turn token) is on the left-hand side of the board as well. While the game board doesn’t seem to be a necessity to play, it adds a nice area to keep the cards neat and tidy.

The substance and backbone of this game are the cards. and they are great in quality. The art on each of the cards—done by Xavier Collette and M81 Studio—is absolutely beautiful.

The Plot cards have a three-by-three grid, the same as the game board, and each player’s position is represented on this board. There is also a “witness” that is identified on these cards. These cards will be used only by the ghost player to know which cards on the grid are the cards that they will be giving each player clues about during the game.

Probably the coolest components in Mysterium Park are the Intuition pawns. They represent the player’s choices during each round and are a different color for each player. The players will also have a circular, color-coded Innocent token that indicates a successful guess on the game board.

The game turn marker is used to track the game rounds. I wish the marker were better incorporated into the game board, but instead it sits to the left of the game board. This means it often slides around on the gaming surface.

The final batch of components are the Ticket tokens. There are just three of these. They are standard, solid punchboard components printed to resemble tickets you might receive at a carnival. The ghost player can spend a Ticket token to refresh any number of Vision cards in their hand from the deck.

I find that the original Mysterium is the more involved, and deeper game. There’s just more game to it. However, Mysterium doesn’t really work at the lower player counts as well and shines best at 4-6 players.

Mysterium Park contrasts nicely with Mysterium in this way. I have played most of my games as just a two-player game. It works brilliantly, and actually might be just a bit more difficult to win as a two-player than it is with larger player counts.

On top of that, I have found that you can play this with a physical copy, a couple of webcams, and a camera for pictures of cards via remote play pretty easily. This means if you are short on players to play at home or in your local area, you might be able to organize play online without having to use the tedium of an application like Tabletop Simulator or Tabletopia.

Personally, I say buy both! They are great games, each in their own right. While very similar in mechanics, the gameplay and experience of both fill very different niches for me.

Using a scale of 1 to 10, where a 1 is a very bad game and a 10 is an amazing must-have game, I rank this game at a 7. It’s always a fun game to play and I enjoy getting friends together to play it. Plus, it’s fast to set up and play!

If you love image interpretation games with great art, then check out Mysterium Park. I am sure you won’t be disappointed!

Board games and emotional intelligence seem like two totally separate topics, but your tabletop can be a training ground for your mental health! Teach your brain healthy habits while you move your meeple!

Freshly into its second edition from Mongoose Publishing, Traveller has come a long way from its humble beginnings in the late 70s. Create spacecraft, visit alien worlds, and adventure across the universe in this sci-fi roleplaying game.