First published back in 1978, Glorantha and the robust RuneQuest rules system have decades of design and playtesting woven into them. The rich history of the setting was introduced in 1975 with Greg Stafford’s fantasy board game, White Bear and Red Moon.  The world was so engaging that it was shortly after spun into its own role playing game, quickly becoming the second most popular RPG of the time, behind Dungeons and Dragons.

Over the decades, it has survived the test of time, produced hundreds of publications, and influenced popular systems like Call of Cthulhu. It has even passed through the hands of publishers like Avalon Hill,  landing back in the loving hands of Chaosium, the original and current owner. In fact, Chaosium was originally founded specifically to publish White Bear and Red Moon along with its spinoff, RuneQuest.

If you are new to RuneQuest, where on Glorantha do you even start? The newest edition of RuneQuest – Roleplaying in Glorantha (4th Edition) is where this quest begins!

The Gist of 4th Edition RuneQuest 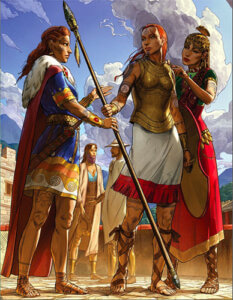 Glorantha is a Bronze Age world of myth and magic, built on Runes in the same way our world is built on atoms. RuneQuest is a set of rules that turns these Runes into passions, which can drive and inspire characters—coupled with magic spells and brutal, dangerous combat. Organizations form cults to teach members skills and powerful Rune magic.

Publisher Chaosium has released a hearty new edition of RuneQuest that directly ties both Glorantha and Runes into the rules. These rules help define and continue to build the world. The base rules instruct you to use a d100 dice roll, succeeding only if less than or equal to the number it is being measured against—whether that is a skill, a Passion, or a Rune. That makes it easy to determine whether you succeed.

Your character knows spells, is influenced by Runes, and may even have beast companions or mounts like bison and zebras. As you adventure, your Runes and passions serve as guides to decision making, and will slowly fade if you go against your chosen beliefs. Your reputation will increase, opening up even more opportunities to find adventure. Your power and influence in your cults will continue to grow over time. You may even become a leader in a cult!

Examples of Playing and Running RuneQuest in Glorantha

So what is it like to live and adventure in Glorantha?

Chaosium’s SoloQuest: The Battle of Dangerford serves as an effective RuneQuest RPG primer: 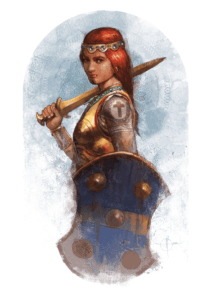 You are Vasan—daughter of Farnan, a warrior of Sartarite. Your father’s body and soul were devoured by the Crimson Bat, an evil monster of the oppressive Lunar Empire. This violation angered you enough to have you join a rebellion against the Lunars. You are a bison-riding lancer for the Sartarite army, and a decent archer. A successful Scan roll allows you to gather details about the opposing army and you can try to increase that skill if you survive the upcoming battle. 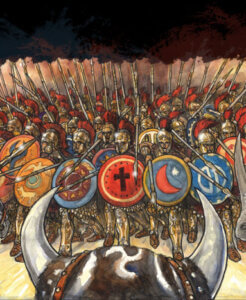 Your gods include Orlanth—the Storm Lord—who skips along the river chanting your champions names, and Humakt—God of Death—sitting beside every warrior as they prepare to fight. Fog hangs over the battlefield. You have time before the fog lifts and the battle starts.

First, you decide to speak to your ancestors, and pray to Orlanth. You make a Worship roll and, if you succeed, you have a chance to increase that skill and also to improve the outcome of the imminent battle.

You also talk to your leader. Despite your inexperience, your Reputation roll succeeds and she recognizes you. She compliments you in front of her other commanders, inspiring you for the upcoming conflict.

Battle comes all too soon and your decisions are difficult. You see your leader about to engage in one-on-one combat with an enemy leader. Your honor compels you not to interfere, but if your leader falls, the chance for victory diminishes and the courage of your forces will be shaken. However, if you interfere, your leader will remember how you dishonored her. It isn’t about simple fighting and killing; Every decision has meaning, and even the best warrior can die to a well-swung blow.

What is it like for the Gamemaster to create a campaign and run adventures in Glorantha?

As Gamemaster (GM), you decide to focus on Dragon Pass—a region in the larger world of Glorantha. Armed with the RuneQuest Starter Set, you have a map of Sartar and the settlement of Jonstown, some adventures to get you started, and a copy of the full rules from RuneQuest – Roleplaying in Glorantha (4th Edition).

Once your players start to form relationships with local rulers, you’ll know what types of adventures they want to go on and you can build from there. You could also entangle them in family drama, or involve them in cult and country shenanigans!

Really Though, Where to Start?

If you have never played RuneQuest and know nothing about Glorantha, the RuneQuest Starter Set contains everything you need to get started. You get rules to play the game, 12 pre-generated characters, setting information including a starting kingdom and the settlement of Jonstown both with detailed maps, a solo adventure to learn the rules, and even a well made set of dice. This content can be used in an ongoing campaign in most cases. Even the solo adventure, along with a pre-generated character, can be given to brand new players to try out the rules and get a taste of the world before diving into a campaign.

If your players don’t have a need to create their own adventurers yet, the campaign from the Starter Set transitions nicely to the adventures in the Gamemaster Screen Pack; Apple Lane is just down the road from Jonstown and your players can slowly start to learn about the bigger world as they continue on their journeys. Further adventures in Dragon Pass can be found in The Pegasus Plateau & Other Stories.

Jumping Right Into A Campaign

The core rulebook does not have monsters, or much in the way of GM and adventure building advice. However, The Glorantha Bestiary adds monsters and new playable species to the core rules, and the Gamemaster Screen Pack has adventures that GMs can use as examples of how to build their own campaign.

The RuneQuest core rules focus on six cultures found in Dragon Pass, while the GM Screen Pack and the Glorantha Bestiary hint at a bigger world. Both have maps of Glorantha: one depicting the nations and larger terrain features, and the other noting where monsters can be found. Adventures in the wider world are covered in The Smoking Ruin & Other Stories which takes place in the untamed South Wilds. For player characters, The Red Book of Magic offers hundreds of new spells as well as some new monsters for the GM.

The Glorantha Bestiary also offers the GM more tools to expand the players’ options. Rules for players playing non-human species cover a wide range of options from bipedal ducks and centaurs to baboons and dwarves. Players’ characters will also have stats for their mounts and companions—from animals to elementals to spirits. 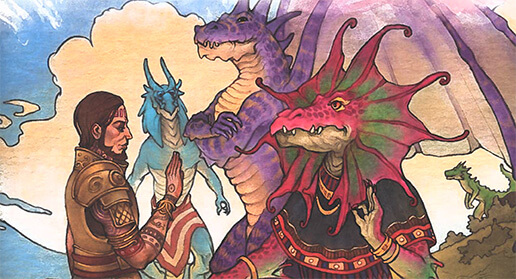 If you want myth and magic in a fantasy Bronze Age world steeped in decades of development coupled with robust rules, then you can’t beat RuneQuest! Chaosium has plenty of products to help brand new GMs and players get started as they explore Glorantha. If you want to experience a masterwork in world-building and game design, try RuneQuest – Roleplaying in Glorantha!

[ Looking for more RPG content? Try our breakdown of the Dungeons & Dragons editions! ]

[ See all of what Chaosium has to offer! ]

[ View all RuneQuest products from all publishers, vintage and modern! ]

Pegasus Plateau & Other Stories, The