The Return to Dark Tower – An Evolutionary Leap in Tabletop Gaming

A remake of the legendary 1981 Dark Tower game from Milton Bradley, The Return to Dark Tower is one of the most anticipated tabletop games of 2021. It gives every indication that the three years it has been in development have been well spent.

Not only do the photos and videos we’ve seen so far look promising, but the star-power behind this project has had us on the edge of our seats since its initial announcement.

Restoration Games’ Chief Restoration Officer, and co-designer for The Return to Dark Tower, is Rob Daviau. Daviau is most well-known for his work on the Pandemic Legacy series. The other primary co-designer is Isaac Childres, whose most famous project so far is the story-driven, tactical dungeon crawler Gloomhaven. and its imminent stand-alone successor Frosthaven.

If you’re involved in tabletop gaming, you have probably at least heard of those titles. Gloomhaven and Pandemic Legacy: Season 1 are currently the two highest ranked games on Board Game Geek. Two rock star designers uniting under one project, along with a talented team of two dozen designers, engineers, and artists to bring us The Return to Dark Tower; a faithful remake of the 1981 electronic board game Dark Tower.

The original Dark Tower game was, for its time, revolutionary. It wasn’t uncommon to see electronics in games in the early 80s, but the inner workings of the tower that sat in the center of the game board was anything but common.

The first iteration of the Dark Tower could guide you through movement, combat, and bazaar (marketplace) interactions (including an awesome “Haggle” button!). It could maintain and dictate back to you the exact contents of your inventory, and prompt with unique choices throughout the game. The tower would remember decisions you made and those decisions would effect how it behaved throughout the game. It was an absolute technical juggernaut in its day.

All of these calculations and behaviors connect with you through a visual interface of rotating transparent images inside the façade of the tower. The images are black when inactive, but become lit up by lights inside the tower when relevant to the actions at hand. There is a great demonstration of the original Dark Tower on YouTube user John Lehman’s channel here that is worth a watch!

From Enemies to Friends

One of the largest structural changes that designers Daviau and Childres made was swapping the primary mode of play from competitive to cooperative. Dark Tower was primarily a competitive game that saw players competing against each other AND the tower to win, but the game also had co-op and even solo play modes. Return to Dark Tower is cooperative-forward, but also has a competitive mode and supports solo adventurers.

The Tower, the App, and the Game Board

There are three main aspects to The Return to Dark Tower: the tower, the app, and the game board. 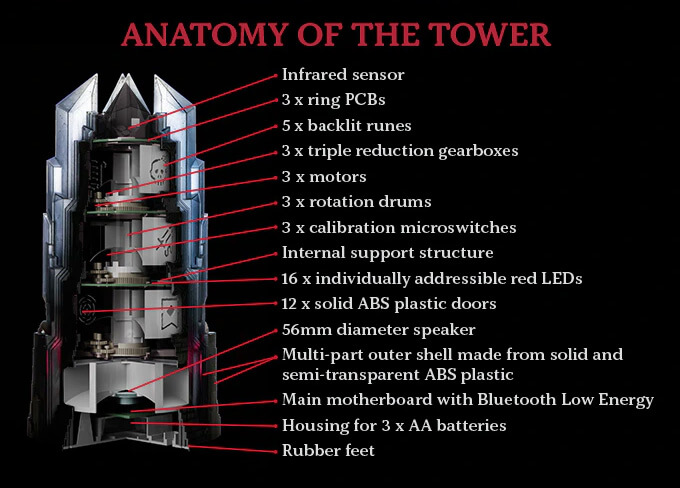 The updated tower is an elegant and eerie sight to behold. Rising a healthy 300mm (11.8″) above the game board, it stands ready to rain corruption on the kingdoms below.

Bluetooth tech is the engine of this iteration of the tower and it gets its power from three AAA batteries. Of immediate concern there is battery life. The game’s play time sits at 100-120 minutes so it’s not unreasonable to be concerned about battery life. Restoration Games has confirmed that they’re dedicating time to minimizing the tower’s power usage.

Additional testing of the tower has come in the form of the standard shock and drop tests to make sure that it can survive both shipment and household accidents. Hopefully this means players don’t need to be paranoid about dropping their brand new, and relatively expensive, piece of technology!

The tower has a rotating, motorized core and openings which can be sealed and unsealed to potentially cast skulls and corruption across the kingdoms! There are synchronized sounds and lights that correspond to events that occur within the game so it feels like the tower is reacting to the adventure the players are having.

One of the more difficult problems the designers faced was how to create a tower that would be as technologically impressive to today’s gamers as Dark Tower was to 1981’s gamers. They quickly realized that it was more efficient to have an app do the computational work, rather than building a custom circuit inside the tower itself. Virtually everyone is carrying a small computer in their pocket that is more powerful than a custom tower would be while still maintaining a reasonable end cost. Connecting to an app via Bluetooth kept the cost of the game down considerably, but yes, you need the app to play the game.

The team has also confirmed that there will be support for the app for years to come so we can enjoy the game well into the future without worrying about aging tech. 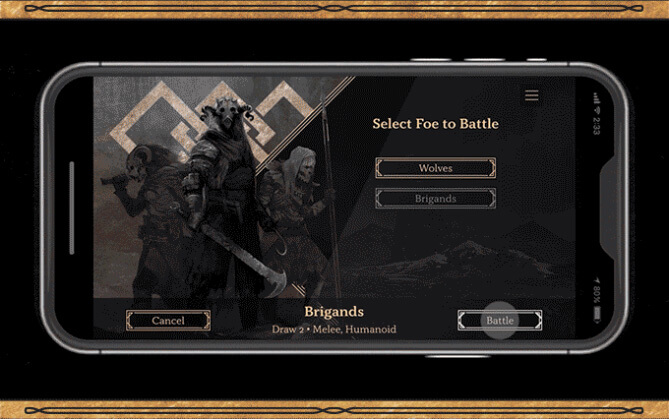 The app has a nice user interface and does the heavy lifting of guiding the player through the game and hosting the quest and combat systems. The Restoration Games team spent a lot of time balancing the app with the tower and game board. What they wanted to avoid was essentially creating a phone game that came with a game board and a tower. Significant effort went into avoiding that pitfall. Playthroughs seem to show the app as simply a guiding force, rather than the center focus of the game.

The game board is circular with a 600mm diameter and is divided into four sections. Each section represents a kingdom and each playable hero is the champion of their respective kingdom. The tiles of the board have unique names and are of six different terrain types, each with its own effect on how actions carried out on that tile are to be performed. 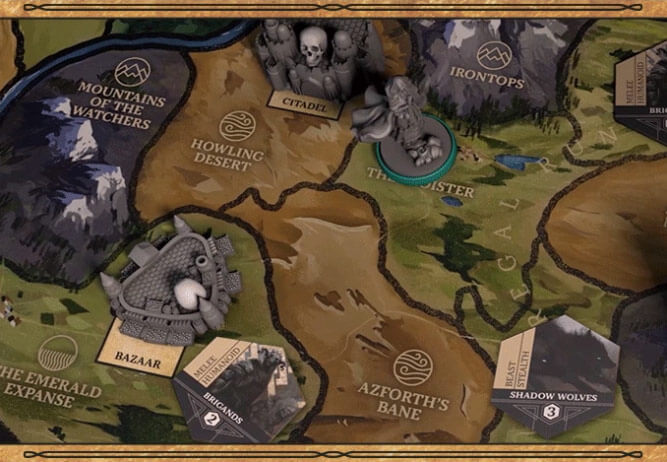 Generally, players choose an ally card at the beginning of the game and that ally gives them a quest. All players must complete their quests and this is what summons the adversary from the tower for the final fight. Players either win together, or lose together in the primary cooperative mode.

The game board is set up differently depending on the adversary you have chosen from the app. Some buildings may have more or less skulls on them at the start of play based on this.

Skulls will periodically come tumbling from the tower, rolling across the kingdoms and will add corruption to buildings they land on. Corruptions are negative effects added to a player’s character card. Two corruptions can be on a player at the same time, but getting a third corruption on your hero means the game is over and the adversary has triumphed!

Spirit tokens are the sort of hero points that players get at the beginning of the game and can use to gain virtues, remove corruption, and be more effective when reinforcing. Each player must choose when and how to spend their spirit in order to maximize the chances of victory because each hero only gets a limited number of tokens.

Gear is a comparatively inexpensive and easy way to strengthen the hero, but each hero can only carry one of each type. Potions are powerful, but unpredictable and players are allowed an unlimited number of them.

Each game consists of six rounds, called “months,” and each month is approximately eight turns per player. The app is a helpful and intuitive guide in this aspect! 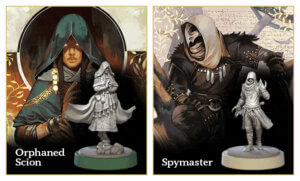 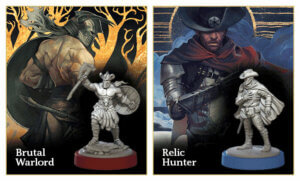 In addition to the virtues you can purchase with your Spirit tokens, heroes come with two virtues at the start of the game.

Get Your Hands On It ASAP

Restoration Games is saying that full release is still set for July 2021. Preorders have been sold out for some time now, but they’ll be restocked soon so visit our product page here and add it to your Wantlist so you get notified immediately when they come in!

Fireball Island - The Curse of Vul-Kar