PQ-17: Arctic Naval Operations 1941-1943 is the first game in the Decision at Sea series of WWII air-naval games highlighting the impact of reconnaissance, fuel, and weather without the drawbacks of a double-blind system or tedious bookkeeping. 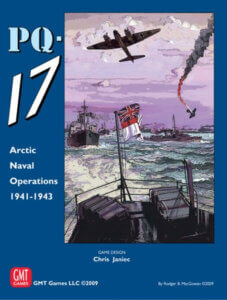 Players maneuver blocks on the map board, each representing a force of submarines or surface ships. Their identities remain hidden from the enemy player until located by a successful search. The block then flips exposing its identity. It may represent one ship or one hundred—or none at all, as it may be a dummy.

Cards are used to resolve searches quickly and efficiently. A successful search yields intelligence of varying accuracy, while failure to relocate the enemy in a timely manner results in lost contact and generation of another dummy.

Players must also cope with fuel restrictions, using simple rules and the use of markers on Force Displays (where all ship counters are kept until needed for combat), precluding the need for record keeping while preventing unrealistic freedom of action.

It is Spring 1940, and both the British and the Germans have plans to invade neutral Norway. The British still have the French on their side, while the German Kriegsmarine will never be larger. Who will strike first? 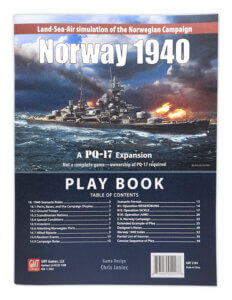 Norway 1940 is a zip-lock expansion for PQ-17 that adds all the British, French, Polish, and German naval and air units needed to re-fight this tense air-naval battle, including such seldom-seen ships and aircraft as the repair ship HMS Vindictive, German Type II U-boats, Blackburn Skuas and Rocs, and early Ju88 heavy fighters.

Special rules reflect the unique conditions of the campaign, such as Scandinavian neutrality, Norwegian coastal defenses, faulty German torpedoes, shore bombardments, and Allied establishment of a forward naval base (historically in the Lofotens).

Just as in the parent game, secretly determined special conditions offer new opportunities and threats to both sides.

Plus, a 1940 Campaign scenario allows players to refight the entire 10-week campaign, including a semi-abstract system for ground operations that will ultimately decide victory in the game.

Norway 1940 adds additional components to the base game:

The Dark is a solo tabletop roleplaying game about being lost in a darkness that seeks to overtake you, and your desperate clinging to the memories of those you loved.