Orange Swan – WWII in the Pacific

Orange Swan, a historical block wargame, covers WWII in the Pacific from 1941 to 1945. Its name reflects that of its predecessor—Black Swan, a game that covers WWII in Europe—but also that of the United States’ plan for defeating Japan. The US developed that plan long before Pearl Harbor and it was called War Plan Orange.

Players may notice that Orange Swan uses many of the same game mechanics as Black Swan, but with greater focus on the innovative—and mechanically simple—naval system that was universally praised.

One revision that entirely changes the feel of the game is the new Oceanic Blitz phase. Like Black Swan’s land-based Blitz, Orange Swan’s Oceanic Blitz translates the land-based dynamism created from double turns to the ocean!

Similar to other block games, the “fog of war” is a core element in Orange Swan, as a player cannot know the identity or the strength of an enemy unit until it is revealed in combat. And once combat has ended, the strength and identity are hidden again.

This is a historical game with some fixed starting points, but the outcome is completely unpredictable, and despite the historical result, Japan can defeat the Allies (China, Great Britain and US).

You can also play both Orange Swan and Black Swan together! 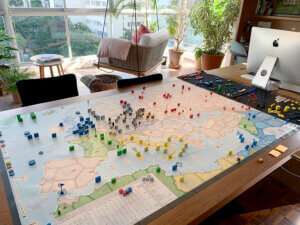 With over 220 unit counters, players can enjoy hours of fun by playing the full Orange Swan Campaign from 1941 to 1945, the shorter 1942-1945 Campaign, or by playing one of the other scenarios.

Each scenario has a different difficulty level, rated in brackets from 1 (very easy) to 10 (very hard).

Every scenario has different victory conditions and length, with a different playing time of 1 to 3 hours. The Campaigns are much longer, up to 50 hours of fun. For playing the Global Campaigns you need both games.

Pick up a copy of Orange Swan today!