The road trip is a staple of the American summer vacation. And no destination is more classic than a national park. The United States is now home to 63 national parks stretching from the arctic to the Pacific Ocean to the Everglades.

Our parks preserve wildlife habitat, spectacular vistas, and recreational opportunities for the enjoyment of all. We live in a beautiful country, and we encourage you to get out this summer and visit a state or national park close to you, whether that’s Yellowstone—the first national park—or our newest national park, West Virginia’s spectacular New River Gorge National Park.

But with gas prices as high as they are now, maybe you are looking to stay a little closer to home this summer. Maybe driving for days on end so that you can sleep on the ground and fight off clouds of mosquitos doesn’t sound as appealing as rolling dice in your air-conditioned basement.

Through the technology of board games, you are now able to enjoy the national park experience from the comfort of your own home. Go for a hike, photograph wildlife, and roast marshmallows in these tabletop versions of America’s national parks.

For the “indoorsy” among you, we present our list of the best national park-themed nature games.

One of the best things about visiting our national parks is the spectacular views and beauty of nature. Parks, from Keymaster Games, captures this visual splendor in beautifully illustrated cards representing U.S. National Parks. The artwork alone makes Parks a joy to play.

Each player manages two hikers who traverse a trail, gathering resources and taking photos. This part of the game works as a worker placement game. Once a hiker reaches a spot and takes its action, no other hiker can visit that space unless the player exhausts his or her campfire.

When hikers reach the end of the trail, they can take bonus actions such as buying gear, which will give them special abilities, and spending resources to visit a park, claiming its card and its victory points. This is the primary way to score points.

Then the hikers are convoyed back to the trailhead, the trail is randomized, campfires are relit, and the hike begins again. When players have hiked through four seasons, the game is over and the points are tallied.

Players will score for parks visited and photos taken. They will also score points for meeting their private objectives.

Keymaster has published two expansions to Parks. Parks: Nightfall adds new parks to explore and a new camping mechanism. Parks: Wildlife releases later this year and will add even more to the game, including a wandering bison granting bonuses to players who encounter it.

Our nation’s parks are spectacular, and we encourage you to climb as many peaks and take as many photos as you can. But if you are stuck inside, playing Parks is the next best way to experience Yellowstone or Denali.

Keymaster followed up on the success of Parks with a series of three strategic memory matching games. All three games use the same art from the Fifty-Nine Parks Print Series used in Parks.

The rules are the same in each edition; only the art is different. Parks: Plains Walker showcases national parks in the Great Plains region. The Mountaineer Set features 22 mountainous parks, and Parks: Coast to Coast focuses on parks with notable bodies of water.

The Parks: Memories games are more than the simple tile-flipping memory games we played as children. On a turn, a player reveals two of the face-down tiles, as you might expect. Then he claims one of them and replaces it with a tile from the deck. Finally, he uses the hiker token to lock a tile, preventing the next player from claiming it.

Revealing parks with matching icons (water, forest, etc.) enables special powers the player can use on future turns. The first player to collect three matching pairs wins. The hiker token and the special powers add an element of strategy and elevate the game above a mere memory exercise.

If you love the artwork in Parks and you are looking for an even faster game, then make some memories with Parks: Memories.

You might think that Keymaster had exhausted the national park theme with the six boxes available in the Parks and Parks: Memories series. But the nations’s natural beauty continues to inspire. Trails is the next game featuring artwork from the Fifty-Nine Parks Print Series.

Players move their hiker tokens along a trail, collecting resources as they go. They can also take photos and survive bear encounters to earn bonus points. They can spend resources at the trail ends to earn badges which also confer victory points.

When players reach the end of the trail and begin the journey home, the sun begins to set. As the sun moves back along the trail, the tiles are flipped to their night side, revealing even more scoring opportunities.

When the hikers have returned to the trailhead, the game ends and points are totaled. Trails features the same gorgeous artwork we have seen in Keymaster’s other games in the series. If you want the full national parks experience, start with Parks. If you can’t get too many images of mountains, wildlife, and scenic vistas—or you are looking for a quicker, lighter, and cheaper option—hit the Trails.

Keymaster Games isn’t the only publisher to turn the annual summer road trip into a game. Nor were they the first. In 2014, Bink Ink published Trekking the National Parks, a race to visit as many national parks as possible. The game is now published by Underdog Games.

This family board game plays more like a traditional board game. Players play cards to move their meeples across a map of the United States, visiting national parks and collecting colored stones at each location. When visiting a park, a player can discard the required cards to claim that park for herself. Major parks cannot be claimed, but they can be occupied by all players who visit and discard the required cards.

When all stones have been collected or one player collects five parks, the game ends. Players score points for the parks collected and for collecting the most of each color of stone.

Starting with the player who read the question, players write down their best guesses. The answer will always be a number. The player who comes closest to the correct answer without going over wins that card. That player is then given a bonus question. The first player to collect the required number of cards wins.

If you prefer the jetsetting lifestyle to camping and hiking, Bink has also designed Trekking the World, a game like Trekking the National Parks but with a globetrotting theme.

USAopoly‘s National Parks Get Wild is a chaotic, simultaneous dice-rolling game for three to six players. Each player starts with a board portraying a national park as well as animal tokens representing different species. Players simultaneously roll their dice, using the results to move animals to the left or right. The goal is to move the native animals onto your board while getting rid of the animals that don’t belong.

The national park theme is not as strong with this game and there is little strategy. But if you love frenzied dice rolling and dexterity games, go wild with National Parks: Get Wild.

USAopoly also brings us PicTwist: National Parks Edition, a spatial puzzle featuring photographs of some of the most iconic vistas in our national parks. Each player receives a photograph that has been divided into nine tiles. The tiles are mixed up and the players must compete to rearrange them.

The movement of the picture pieces is programmed by movement tiles. Players must program their moves quickly before they run out of time. Then they simultaneously rotate and swap photo tiles according to their programming. If a player succeeds in restoring her photo, she wins. If no one completes their photo correctly, they play another round.

PicTwist: National Parks Edition is a good game for those who enjoy spatial puzzles and programmed movement. And if you appreciate the beauty of our natural wonders, you will enjoy seeing them come into focus before you.

The Classics Go for a Hike

But what if you love the national parks and you are a fan of the old-school classics? Many of the popular family games have national park-themed versions you can take with you on your road trip this summer. 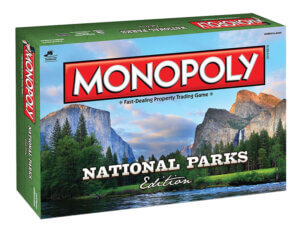 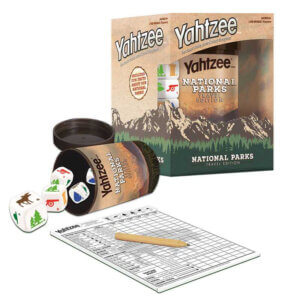 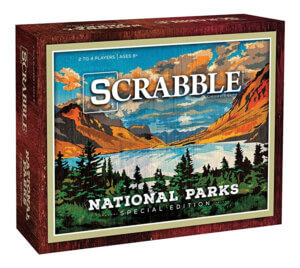 There’s Monopoly: National Parks Edition, Yahtzee: National Parks Travel Edition, and Scrabble: National Parks Special Edition. If your family prefers card games like Hearts, Up and Down the River, or Go Fish, you can still pay homage to our national parks with the Parks Playing Cards. These decks of standard playing cards feature the art from the Fifty-Nine Parks Print Series used in the Parks board game.

Visit your national parks this summer

There really is no substitute for a hike through the red stone formations of Arches National Park or watching a herd of elk in Rocky Mountain National Park. But if that’s just not in the cards this summer, then skip the lines at the truck stop bathrooms, the highway construction, and the sunburns. Gather the family together for a vicarious vacation with one of these games from our list of the best national park-themed board games!

[ Read: Escape Room Games You’ll Want To Get Into ]

[ Shop all Board Games ]

Parks - The Board Game (Second Printing)

Trekking the National Parks - The Board Game (2nd Edition)