New HeroQuest – How Does It Compare?

The best thing about HeroQuest is…!

…that it’s releasing soon! The expected retail release is late-2021!

Now that we’ve got that out of our system, let’s compare and contrast HeroQuest(1989) and Hasbro‘s new HeroQuest(2021). 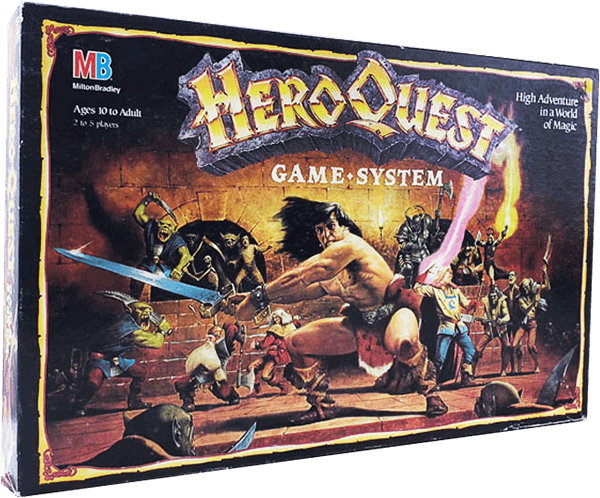 In the late 1980s, game designer Stephen Baker left his job at miniature wargaming manufacturer Games Workshop. He took a position with the board game juggernaut Milton Bradley. Immediately, Baker began asking Milton Bradley’s head of development to give him permission to begin development on a fantasy adventure game.

After stipulating that the game must be simple and approachable, Baker was given permission to begin development on what would become HeroQuest(1989). Baker would ask Games Workshop to help in the creation of the miniatures for the game. They obliged, and they would also make contributions to the background world and the art in the scenario and rule books.

We are fortunate enough to have access to an original copy of HeroQuest for photos thanks to our Buy/Sell/Trade program here at Noble Knight Games. We buy hundreds, sometimes thousands, of gaming products each week including Magic cards, RPGs, board games, wargames, miniatures, even dice, novels, comics, and more! You can receive payment in cash or store credit for your preowned items.

If you’re interested in selling to us please e-mail a list of titles, along with a general note on their condition, to trades@nobleknight.com. Please note any missing components, writing, or excessive wear, and indicate whether you prefer cash or store credit!

The Gist of HeroQuest

“HeroQuest is a fantasy adventure game set deep within a hidden stone labyrinth. This maze of underground rooms and corridors is controlled by the Evil Sorcerer Zargon and his forces of Chaos.

Four valiant heroes have been summoned by Mentor, the good and ancient sage, to do battle with Chaos. Thiers is the ultimate heroic challenge — descend into the treacherous world of the unknown and restore honor to the Empire. Destroy the evil forces of Chaos!”

“Bonded by their loyalty to the Empire, the brave heroes unite. Stepping cautiously, they journey deeper and deeper into a dark, hidden world…”

What’s In The Box?

Listed in the Instruction Booklet is: 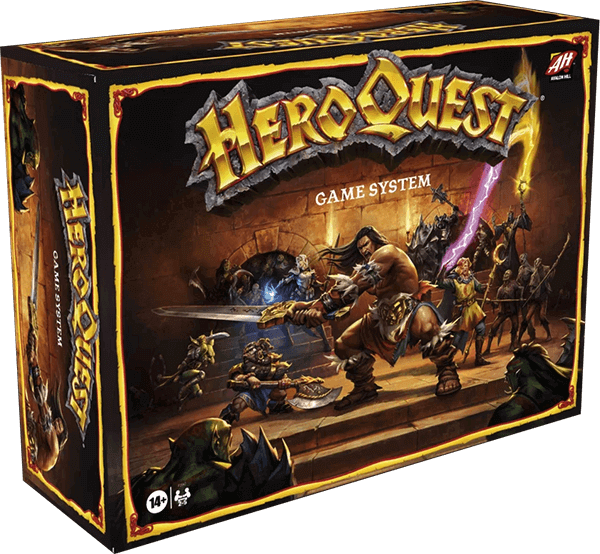 While the new HeroQuest hasn’t hit retail yet, we do have some knowledge about it and its contents.

Where Can We Expect Gameplay Changes?

Hasbro has said that the new version will have an updated rule book and quest book. These have been based off of the U.S. version of the rule and quest books from the original game. It seems like they are staying true to the original game because they claim to have only made “minor changes.” This bodes well for everyone looking to get a nostalgia kick from the upcoming 2021 release!

This is where the changes are most obvious. Although they designed the original miniatures and some of the artwork, Games Workshop was not a part of the new version. So we find ourselves with brand new takes on the player characters and monsters. This includes a name change from Chaos Warrior/Warlock to Dread Warrior/Sorcerer. We also now have Abominations where we once had Fimir. So let’s take a look at all of the currently available digital renderings of the new miniatures!

These include brand new sculpts as well as adding female variants for barbarian, dwarf, and wizard; and a male variant of the elf!

The new furniture models seem to have struck a very nice balance. They are more detailed than their predecessors, but haven’t been overcomplicated. They seem to hold true to the style of the original game!

Brand new sculpts of the existing monsters and some new names join the list!

There are also some little added extras depending on which version of the game you pick up!

A Closer Look At The Contents

More glances of the new components of HeroQuest!

We’ll be stocking the new version of HeroQuest as soon as the retail release is live!

Until then, check out some other popular cooperative miniatures games! Sign Up for our newsletter to get the latest updates right in your inbox!

Return of the Witch Lord Expansion

Descent - Legends of the Dark

Gloomhaven - Jaws of the Lion