Humans have been playing board games for thousands of years. One of the oldest ancient games still being played today, Mancala dates to at least the 7th century and may be even older than that. Mancala is a family of similar games rather than one game with a universally accepted rule set. Variations of it have been played throughout the Middle East, India, Eastern Europe, and Northern Africa.

Mancala influenced many modern board games. Game designers have adopted its basic mechanic and used it to give their games interesting and highly variable action selection mechanisms.

In the versions of Mancala most familiar to North American gamers, the board consists of a double row of 12 pits—six on each side—and two larger scoring pits on either end. Four counters go in each pit. These could be seeds, small stones, or glass beads. In the ancient world, the board could be carved out of stone or wood, or simply dug into the ground.

A player takes a turn by removing all the stones from one pit on her side of the board and then depositing them one at a time in the pits counterclockwise from the starting pit. If the pit has six stones in it, for example, then each of the next six pits gets one stone.

In most versions of Mancala, the final stone placed can be used to capture an opponent’s stones or score points.

When we say that a modern board game uses a mancala mechanic, we are referring to this mechanism of removing all the pieces from one spot and distributing them consecutively to other spots. This often creates an action selection mechanic that is more complicated than simple worker placement. It can also create actions that become more or less powerful as the game develops.

The mancala mechanism also requires players to plan carefully. They might need to take a less productive turn now to set themselves up for a big benefit next turn. But they might also shoot themselves in the foot if their planning doesn’t account for the changes they make this turn.

The mancala mechanism makes a game’s action selection aspect a game in and of itself. If you haven’t played a game using it, you might discover that it becomes your favorite piece of the puzzle.

Check out our list of the top five modern board games inspired by Mancala.

Fight for control of a space station against up to three other factions in Portal Games‘ Theseus: The Dark Orbit.

The space station takes the form of sectors arranged in a circle. Each faction—Marines, Scientists, Aliens, and Grays—has four units distributed among the sectors. On a turn, you will move one of your units clockwise to a new sector. Determine the number of sectors you can move by the number of units on the starting sector. If there are three units in the blue sector, then you will move three sectors.

This mechanism isn’t exactly like the game of Mancala. You don’t redistribute all the units on the starting sector, but the number of units with your pawn determines its movement, just as it would be in a game of Mancala.

When you land in the new sector, you activate any ability cards you have previously installed there such as traps, cameras, and alien tentacles. You may also fight any enemy units present. 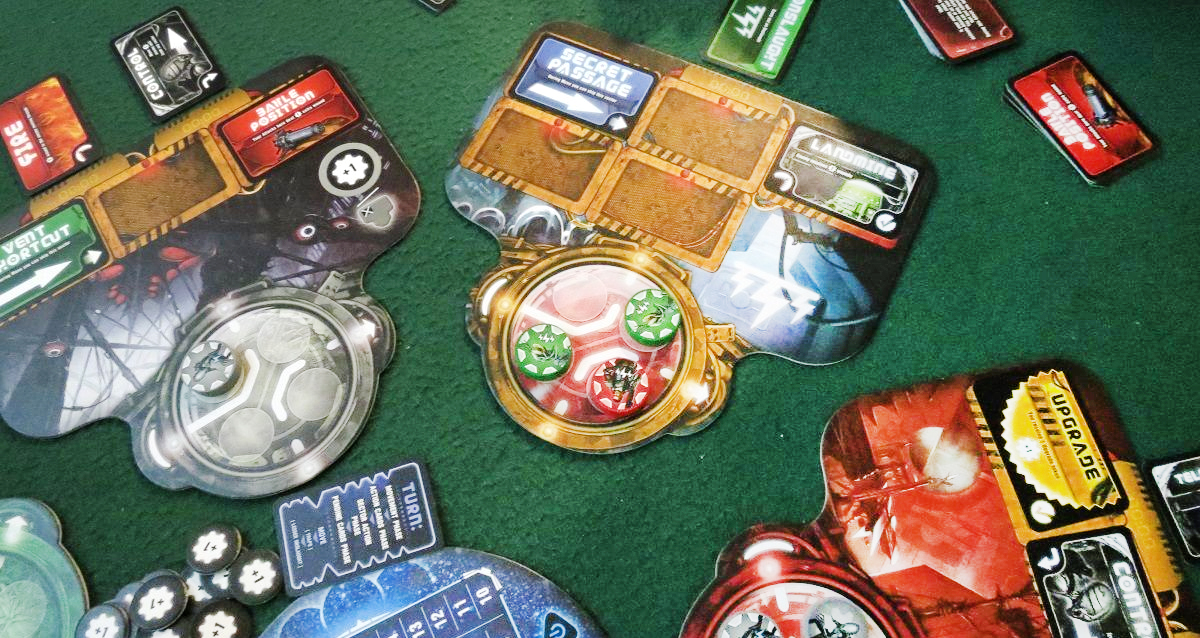 The game ends when one player has played all his or her cards. The player with the most combined health and data points wins control of the station.

Manage your Mediterranean farm in Finca, from Rio Grande Games. Although only number four on our short list of games with a mancala mechanism, Finca boasts a nomination for the Spiel des Jahres in 2009. It was up against some stiff competition that year, including Pandemic and Dominion, the winner.

Like the previously mentioned Theseus: The Dark Orbit, this mechanism differs from a game of Mancala—but clearly draws inspiration from Mancala. The strategy comes from figuring out which pawn to move to maximize your harvest while still ensuring you get the types of fruit you need. Because the number of pawns on each harvest space is constantly changing, every turn requires some thought.

If you are paying attention to what your opponents need, you can also move your pawn in such a way that they will not be able to move their pawns to the desired space.

Finca is a simple game, and the strategy isn’t very complex, but if you enjoy lighter Euros, Finca is an easy-to-learn introduction to games with a mancala mechanism.

3  Crusaders: Thy Will Be Done

Build castles and churches, muster your knights, and vanquish your enemies in Crusaders: Thy Will Be Done, from Tasty Minstrel Games.

Crusaders uses the mancala mechanism to select actions. Each player has his own action wheel starting with two tokens on each of the six action spaces. Determine the strength of the action selected that round by the number of tokens on the space. Then distribute those tokens one at a time in a clockwise fashion, like in Mancala.

If a player takes the travel action, for instance, and there are three tokens on it, then he can move a knight three spaces that turn. After redistributing tokens, some actions become more powerful while the action just taken has no power and cannot be used again until at least one token is placed on it.

In this way, players take actions while also setting themselves up to take more powerful actions later.

Players continue to build, travel, fight, and gain influence until no influence markers remain. The player with the most influence wins. 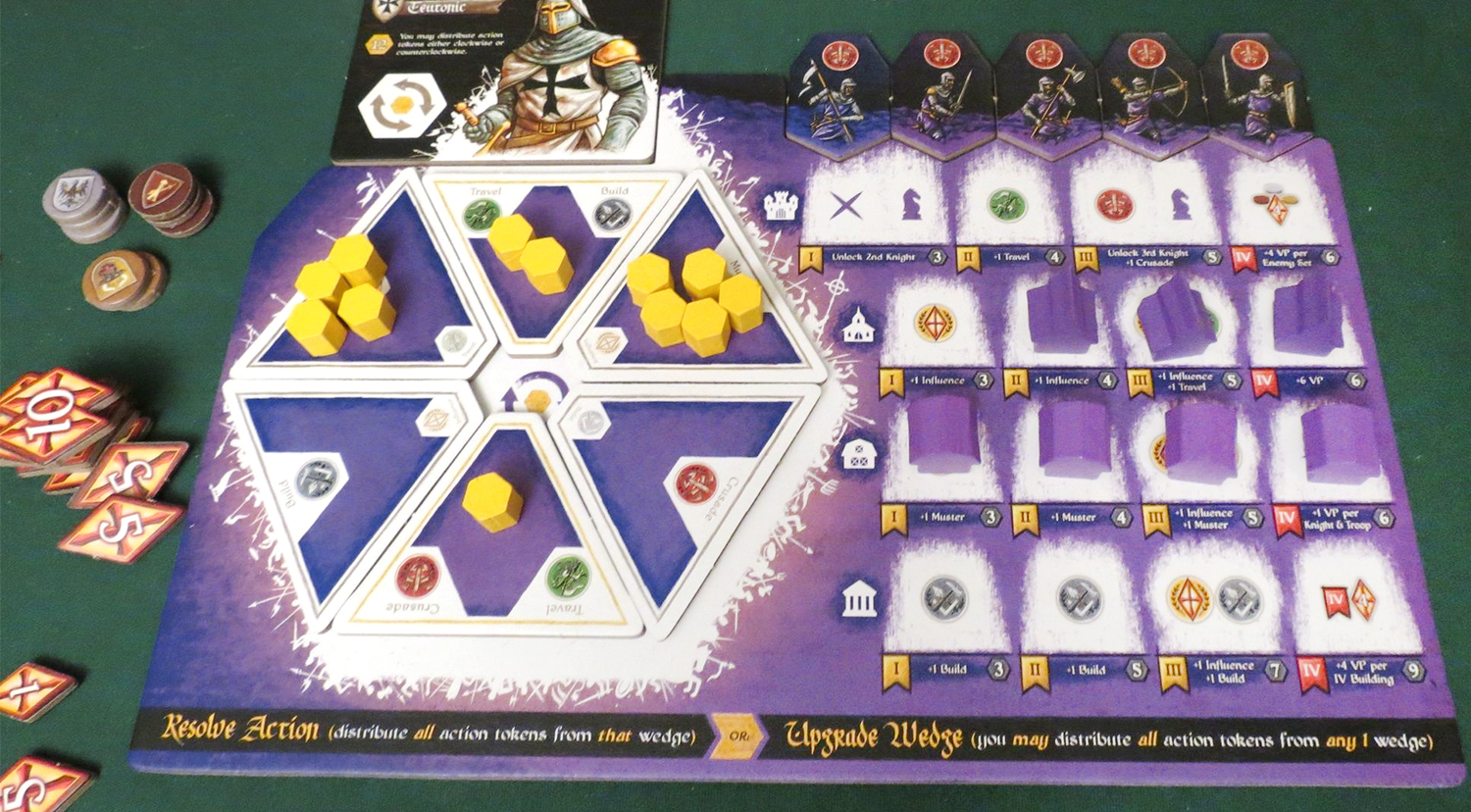 Crusaders uses the mancala mechanism to add more complexity and interest to what would otherwise be a basic action selection rondel. The relative strength of the actions changes throughout the game, providing players with the challenge of taking actions in the order that will yield the most benefits.

Vie for power and influence in ancient Rome in Trajan, from designer Stefan Feld and Passport Game Studios.

Trajan is a purer adaptation of the mancala mechanism than any of the previous games on this list. Each player board features a mancala with six action space. Move all the pieces from an action spot, distributing them one at a time in the spaces clockwise, and take the action from the last spot. Actions include shipping goods, addressing the senate, and building Rome.

Trajan builds on the mancala mechanism by making the pieces colored. Each action space has a bonus tile. If you match the color of pieces with the colors on the tile, you get the bonus points and actions.

Normally in Mancala, the order you play the pieces doesn’t matter since they are all the same. But in Trajan, the order in which you deposit the pieces becomes vital to earning those bonus tiles.

Trajan has many ways to earn points, and—being a heavier Euro game—it’s all about earning victory points. The action mancala requires players to think carefully about what actions they are going to take. Not every action will be available every turn; it’s possible that the distribution of the pieces makes it impossible to take an action until they are redistributed. 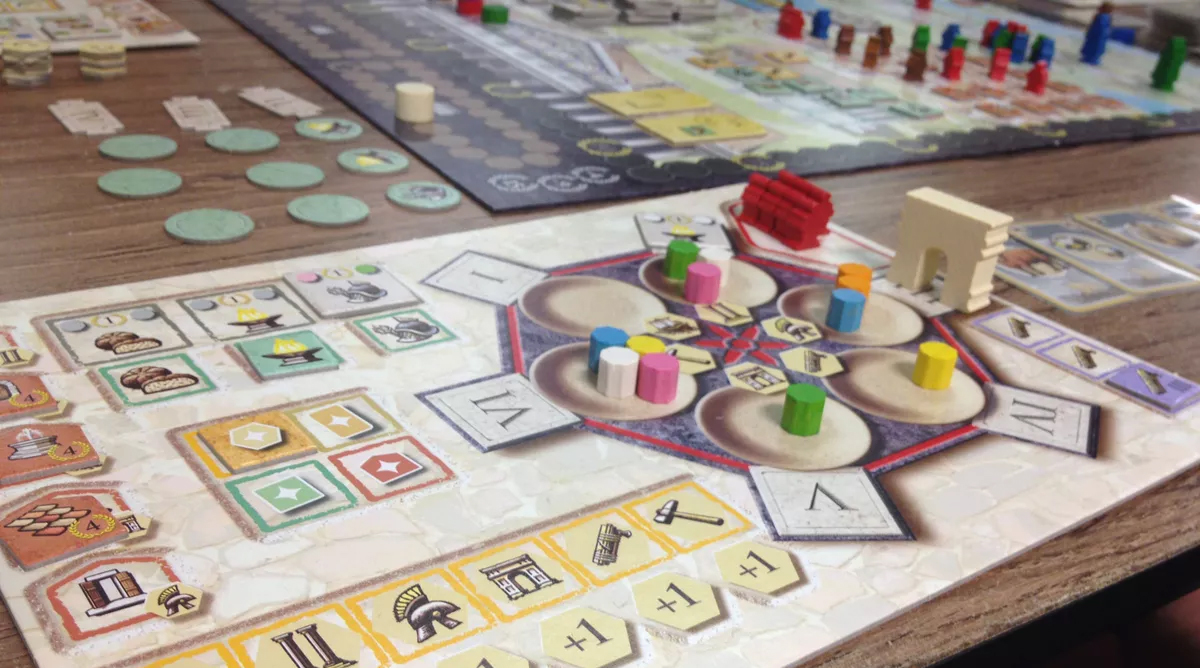 Players also must balance taking the action they want with earning bonus tiles. Do you take an action you really don’t need to take just so you can score some points with its bonus tile? Or do you ignore the bonuses and focus on getting the most from every action you take?

The theme is light in Trajan. But if you enjoy crunchy game mechanics that make you think and plan ahead, you will enjoy the puzzle inspired by the ancient game of Mancala.

Fives Tribes takes our top spot of the best board games inspired by Mancala. In this Bruno Cathala game from Days of Wonder, players maneuver to gain control over the desert tribes.

Instead of using a mancala as an action selection mechanism, Five Tribes makes the entire board a mancala. Players choose a space on the board and pick up all the meeples in that space. They then place them one at a time on a path through adjacent spaces. Placing the last meeple, the player then collects all meeples of that color on that location and takes the associated action. Builders earn points, merchants gain resource cards, and assassins remove meeples from the game.

Five Tribes innovates on the mancala mechanic by not limiting players to placing meeples in a circle. Instead, they can branch out onto any path they choose; there are 30 randomly placed location tiles on the board. The challenge of Five Tribes is in deciding where you want to end up and then plotting paths back from that space to figure out how you can get there.

Five Tribes makes great use of an ancient game mechanism to bring variety and deep strategy to a modern board game. It tops our list of the best board games inspired by Mancala.

Other Ancient and Classic Games

These modern games incorporate Mancala in an innovative way, but if you would rather play the inspiration itself, Noble Knight has you covered with many options for Mancala sets.

If you love Mancala and games like chess, backgammon, Go, and dominoes, check out Noble Knight’s selection of Classic and Ancient Games.

Crusaders - Thy Will Be Done