The Spiel des Jahres 2022 awards were announced on July 16. This year’s main category winner is Cascadia, designed by Randy Flynn, illustrated by Beth Sobel, and published in the United States by AEG.

What is Spiel des Jahres?

The Spiel des Jahres—German for “Game of the Year”—is an annual award given to a board game released in Germany in the previous 12 months. It is considered by many to be the most prestigious prize awarded to board game designers.

The award is highly coveted and usually leads to a boost in sales. You have probably seen game boxes boasting the Spiel des Jahres logo: a game pawn crowned with laurels. Past winners include such classics as Carcassonne (2001), Ticket to Ride (2004), Dominion (2009), Codenames (2016), and Azul (2018).

The award is given to what have often been called—appropriately enough—German-style games. These are games designed to be played in less than two hours by a family or group of friends gathered around a table. There are no awards for role playing games, war games, or collectible card games.

The jury is composed of German-speaking game critics, and to be considered for the award, the game must have been published in Germany. But this doesn’t mean only Germans are invited to the party. In fact, in 2022, no German designers were nominated for the Spiel or Kennerspiel awards. Nominees represented countries from Asia, Europe, and North America. Germans did, however, sweep the Kinderspiel nominations this year.

The deliberations of the jury are not public, but they score games based on the game concept, rule structure, appearance, and design.

The Spiel des Jahres has been awarded since 1978. The jury began giving awards for children’s games—the Kinderspiel des Jahres—in 1989. And in 2011, the jury created a new category for more complex games, the Kennerspiel des Jahres, or Connoisseur Game of the Year. This is where expert gamers will find those crunchy Euro-style titles.

Visit our Spiel des Jahres Winners Collection to browse games from all of these award categories, dating all the way back to the first year of the awards!

The jury also publishes a list of recommended titles that did not receive a nomination but still deserve a play. Here are the nominees and winners for the Spiel des Jahres 2022 awards! A few of them have not yet made it to the shores of the USA, but rest assured that they will be available to you as soon as they are available to us!

Cascadia is an abstract, tile-laying strategy game. Players draft hexagonal terrain tiles and animals such as bears, salmon, and elk. These tiles and animals are added to the player’s landscape to score points based on scoring conditions that change with each game.

Players score points for having large contiguous areas of mountains or ocean. They also score for placing animals. A long run of salmon could score points, but bears might score only if they are placed in mating pairs with no other bears adjacent to the happy couple.

The jury said that “Cascadia is a real feel-good game. You can always achieve something on your turn, even if the choices on offer aren’t exactly what you wanted. The two-part puzzle is especially successful, requiring players to find a good balance between matching landscape tiles and playing the right animal symbols.”

Cascadia looks beautiful and creates a spatial puzzle that is different in every game. Nature lovers will love the theme, and Flynn has created a light strategy puzzle that is simple yet challenging.

In Scout, players attempt to create the best circus using only a hand of cards. Sort of. The theme is very weak in Scout, but the strategy is not. Once the cards have been dealt, players cannot change the order of the cards in hand. But each card has two values, and players can choose to turn their hands upside down to use the values on the other half of the card.

Players can play multiple cards from their hands if the cards are adjacent and either have the same value or values in ascending or descending order. But they can only play if their set is stronger than the set already played—if their set has more cards or a higher value of cards. If they play a stronger set, they will capture the set already on the table and score points for those cards at the end of the game. 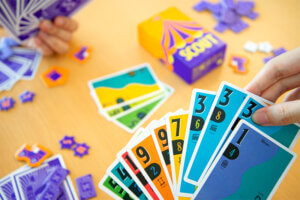 Instead of playing cards, a player can “scout” by taking a card from the set on the table and adding it to his or her hand.

Scout‘s circus theme does not come through at all in the game—the cards are just numbers—but Scout makes up for the lack of theme with interesting gameplay. The fact that you cannot change the order of cards in your hand means that you might have to make weak plays at the beginning to set yourself up for a game-ending and high-scoring play later.

Top Ten is a cooperative party game for 4-9 players. The captain for the round draws and reads one of 500 theme cards, such as “Imagine the secret ingredient in spring rolls, from the worst to the best.” Players are secretly and randomly dealt a card numbered between 1 and 10. Then players must give an answer to the question corresponding to the rank they have drawn.

If the player draws a 2, he might say, “hair from the bath tub drain,” which would certainly be ranked very low by those who love spring rolls. But if she has the number 8, a player might suggest “fairy dust.”

If the captain can arrange these answers according to their rank from lowest to highest, the players succeed. Survive five rounds and you are all Top Ten winners. 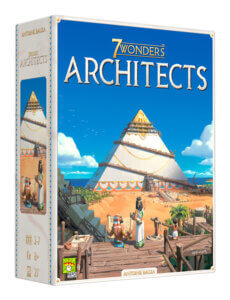 Magic Mountain—or Zauberberg in German—is a cooperative marble-rolling game for children. Players are working together to move four of six magic students to the bottom of the mountain before three witches beat them to it.

Players take turns pulling marbles from a bag and then rolling them down the track, like a game of Pachinko. If a marble hits a student or witch, it moves down the mountain. There is no reading, very little strategy, and a lot of luck in Magic Mountain, making it suitable for young gamers.

The jury said, “Everything in this fascinating co-operative game has been well thought out, from its quick setup to its detailed rules, so that children will always be enchanted by the Magic Mountain.”

The active player rolls five dice and then chooses all the dice of one color to mark off balloons, desserts, presents, and candles from her sheet. Then the other players can choose from the dice that are left and do the same.

If you want a roll and write game you can play with your children, Auch schon clever is a pretty clever pick and a good introduction to the genre.

Wolfgang Warsch had not one, but two games nominated for this year’s Kinderspiel des Jahres. Quacks & Co.: Quedlinburg Dash is a bag-building race game for players aged six and up.

Like his other nominee, Quedlinburg Dash is a child’s version of a popular game for adults. In this case: The Quacks of Quedlinburg. As in its predecessor, players build a bag of tokens throughout the game and draw those tokens to take actions.

A turn is simple: draw a token, move the number of spaces shown and take the bonus for that color token. Players can earn rubies to buy new, more powerful tokens to add to their bags. The first player to reach the finish line wins.

Unlike the Quacks of Quedlinburg, there is no push-your-luck mechanic in Quedlinburg Dash, which will hopefully cut down on the number of tears shed by children who have yet to learn restraint. Fans of Quacks will enjoy the opportunity to introduce its bag-building element to younger players.

In Living Forest, players compete to save a sacred forest from destruction. Begin a turn by drawing guardian animals from your deck. You can turn over as many as you want, but if you reveal three Solitary symbols, you only get one action instead of two.

Use actions to recruit new animals, fight forest fires, or plant trees. The strength of that action is determined by the symbols on the cards you turned over.

There are three ways to win: plant 12 different trees, collect 12 flowers, or extinguish 12 fires. These different win conditions give players many gameplay options and strategies to follow.

The jury had this to say about their top pick: “There are three key factors to the thrill and attraction of Living Forest: the exciting race to twelve points, the risky gamble of when to stop revealing cards and the high level of interaction with your opponents. The three different victory conditions are especially motivating, ensuring a high level of replayability and a different dynamic to each new game.”

Cryptid is a deduction game pitting cryptozoologists against one another in a race to track down a creature of legend. Each player starts the game with a clue about the location of the cryptid. They must deduce the clues given to other players to find their elusive prey.

On your turn, you can question another player by placing a token on the board and asking if—according to that player’s clue—the monster could be in that spot. If your opponent’s clue says that the creature cannot be in a forest and you place your token on a forest hex, then they would tell you, “No.”

Or you can search a space. Each player in turn indicates whether the cryptid could be in that spot. If all players answer “yes,” then you have found the creature and claimed victory.

Cryptid is a quick deduction game with a fun theme, perfect for monster hunters everywhere.

Dune: Imperium is a worker-placement and deck-building game set in Frank Herbert’s Dune universe. The deck-building allows players to customize their strategies. You can choose to become more powerful in combat, or you could develop your political cunning to curry favor with the four factions.

Players alternate assigning Agents to action spaces on the board. They must also play cards from their hands to pay for those actions. Any cards left in hand at the end of the Agent phase can be used to acquire more cards or contribute to combat.

[ There are a lot of Dune games—and you can read about all of them here! ]

Dune: Imperium is currently sitting at number 14 in Board Game Geek’s rankings, making it the crowd favorite among this year’s nominees even if it did not win the Kennerspiel des Jahres.

Quacks of Quedlinburg, The

Gary Con celebrates a life well played! This 15th annual tabletop gaming convention honors the life of Gary Gygax, co-creator of Dungeons & Dragons. What more fitting place for this event than in Lake Geneva, Wisconsin, where it all began. See you at Gary Con!