How I Learned to Stop Worrying and Love Big Magic Events

How I Learned to Stop Worrying and Love Big Magic Events

Playing Magic: the Gathering with friends is easy. You get together, find seats, shuffle up and play. Simple. But what about larger Magic events held at stores—or tournaments?

Those organized play events aren’t really that different. They are just a bit larger, and structured to handle the larger number of players. Big events are a chance to play a lot more Magic with a lot more players than could fit around your kitchen table, and that can feel intimidating at first glance. But they are really nothing to fear. Let me explain.

When you organize a Magic night, you contact your friends and choose a time and location. With bigger Magic events, it’s just like kitchen table Magic—if your kitchen table could seat 200.

The organizer will set a starting time, but you should plan on arriving earlier than the posted “Start Time.” Why?

The Start Time for the event indicates when the actual playing will “fire” (begin). If you arrive after that time, you might be unable to join the event. There may also be a line at registration, or other steps to do before you settle in, like choosing packs or receiving your sealed pre-release kit. The larger the event, the more other things are potentially happening, too. You may see vendors, dealers, cosplayers, artists and, most importantly, friends. You’ll want to have time to chat, look around, use the restroom, and find your seat before play kicks off. You don’t want the entire room to be waiting on you for the fun to begin!

Large Magic events are, by necessity, more organized than kitchen table Magic. That starts right when you arrive. You will first need to check in and pay the entry fee. Most large events have signs and/or helpful staff that can point you towards check-in.

After paying your event entry, the next step is to sign into the system used to run the event. Most organizers now use the Magic Companion app, which is free on both Apple and Google Play app stores. Joining the event via the Magic Companion App makes it easy to see your game pairings, results, timers, and more. To sign-in requires the event code—a string of letters and numbers posted prominently at the event. For large Magic events at Noble Knight Games, this code is displayed on the TV monitor in their Gaming Hall space.

Don’t have the app? No problem! Talk to the judge or scorekeeper, who can manually enter you into the system.

Do you Build—or Bring a deck?

Constructed events will advertise the type of constructed event, such as Commander or Modern. These formats have different rules for how you build your deck. These are the most common: 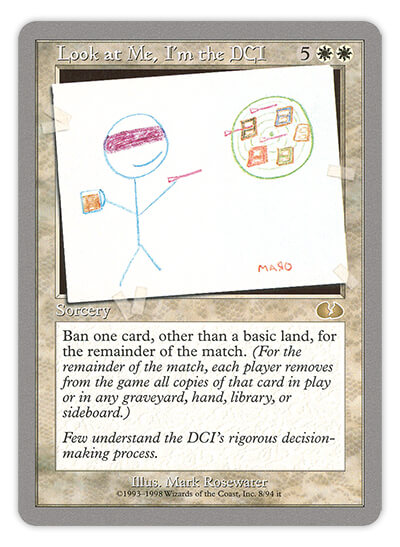 Less commonly, you may see events in the Pioneer, Legacy, Pauper, and Vintage formats.

Most Constructed formats ban certain cards. Information on the formats—and list of banned and restricted cards for each format—lives on Wizards of the Coast’s Banned & Restricted Lists.

Constructed Magic events that have large prizes may require you to provide a decklist—a list of all the cards in your main deck and sideboard—at the start of the event. When you fill one out, make sure to double check it!

In Sealed events, you receive some product—typically six 15-card booster packs—and you build your deck out of the cards in those booster packs.

In a Draft, you start with three draft booster packs. You open the booster, then choose (“draft”) a card, and pass the remainder of the pack to the person next to you. Your other neighbor passes you cards, then you choose one from that pack, pass and repeat.

Limited decks are a minimum of 40 cards, including basic land which the organizer will provide. All the cards that you drafted (for Draft events) or were in the product you opened (Sealed) that are not in your main deck are your sideboard for the event.

For both Constructed and Limited events, card sleeves for your deck are highly recommended. This is for the protection of your cards, but for other reasons as well. Many events, especially larger ones, may even require your cards to be sleeved. This is to help mitigate potential disputes over who owns what card. Luckily, when playing at a store like Noble Knight Games, card sleeves are readily available for purchase on site.

The event will let you know who you are going to play against. At the beginning of each round, judges will post pairings. (If you’re using the Companion App, you will see them there too.) Each pairing will also show a table number. Simply find your name on the pairings list and head to that table number. Check that you are playing the right opponent, and shuffle up. But don’t start playing until the head judge announces the start of the round!

How do we determine those pairings? Most large events use “Swiss” pairings to set up matches. This means that judges pair players randomly for the first round. Then, in each subsequent round, judges pair competitors who have the same win-lose record.

Events with fewer than 32 players generally run four rounds, events with 32-63 players have five Swiss rounds, events with 64-128 players run six rounds, and so forth. Players are not eliminated from the Swiss rounds even if they lose, but they may voluntarily drop out at any time. If you wish to drop from an event for any reason, please tell the judge so the pairings can be adjusted smoothly.

Rounds are generally timed, and last 50 minutes. If one player wins two games within that period, they win. Should time expire before either player has won two games, then the current game continues for six turns total, including the turn that was happening when time was called. If the game is not over when you run out of turns, that game is a draw. When one player is up a game at the end of extra turns, that player wins the match. If neither player is up a game, then the match is a draw. If this doesn’t make sense, and you find yourself in this situation, call a judge! Speaking of which…

The Function of Judges at Magic Events

Let’s talk about judges. They are there to make the event run smoothly, answer player questions, fix mistakes, and prevent cheating. Preventing cheating is important, but judges spend the vast majority of their time on the three former tasks.

Personally, I have been judging Magic events for 20 years. In all that time, the most common question—after “How many rounds?” and “Where’s the bathroom?”—has been “How does this card work?” Judges are more than happy to answer those questions. Magic is a complex game—the comprehensive rules are over 400 pages long—and cards interact in weird and wonderous ways. Judges have received training in puzzling out that weirdness.

Judges are also a resource for players. Don’t be afraid to use them! If you don’t understand something, ask a judge to explain it. Judges cannot advise you on whether to attack, but they can certainly explain how Deathtouch, Doublestrike and Trample interact. (Hint: pretty well!)

You can also call a judge if you are unsure of what happened, or if your opponent makes a mistake. Judges are trained to fix the mistakes players make, and make sure those fixes are fair and consistent for all players. Calling a judge does not mean that you are accusing your opponent of cheating, it just means you want something clarified.

In most cases involving a mistake, the only penalty involved will be a warning. A warning means “mistakes happen, its okay, just don’t make this particular mistake again.” Judges also note those warnings. Occasionally, some nefarious player makes the same “mistake” match after match, event after event. This often results in a ban for deliberately cheating. That’s super rare, but it is another reason to call a judge when something goes wrong.

Besides, judges are generally pretty bored most of the time. Calling us gives us something to do!

Tiebreakers, Draws, and the Top 8

For the Swiss rounds of any event, everyone plays, and no one is eliminated. Some events may, at the end of the Swiss rounds, add a playoff. The most common playoff type is a “Top 8.” The eight players with the best records play a few more rounds—usually single elimination—to determine the overall winner and award prizes.

To determine the Top 8 players, we first look at total points for matches won. Players get three points for winning a match, one point for a draw, and no points for a loss. If, at the end of Swiss rounds, players’ points are tied, we go to tiebreakers.

Tiebreakers can get complex rather quickly at large Magic events. Most players simply play to win and are happy to let the judges and the Magic Companion app do the math for player rankings. If you’re interested in getting into the weeds of how that works, expand the section below.

Dive In and Have Fun!

You should go to a big event primarily to have fun. I do! If I am winning, and in contention for the Top 8, it’s exhilarating. If I’m not in contention, I will be paired against other players who are also just playing for fun, and we will have a good time. And, of course, you will likely see lots of friends and acquaintances at the event.

Some final advice: big events are long. You will likely spend most of the day there. Make sure you stay hydrated and get some food. At large events, judges get frequent breaks, stuff to drink and a round off for lunch. Players don’t get a round off, but they should take time to grab some food. Not only is it miserable to be hungry, but your play will suffer as well. Take care of yourself, good luck, and have fun!

Pete started writing for Magic: the Gathering websites in 1998. He won his first competitive match at a Pro Tour qualifier in 1999 when his Round 5 opponent failed to show up. Since then, he has been to over 100 Grand Prix, 15 Pro Tours and 5 World Championships, most often as a judge. He played in the first Community Cup against Wizards employees—victoriously—and playtested for the Mirrodin card set. About that last thing, Pete would like to apologize for Affinity and say it wasn’t really his fault.

[ Browse all Magic: the Gathering ]