Now in mid-July, we are getting very close to the release date for the 2nd edition of the Doctor Who: Time of the Daleks board game. What better time than now to take a look at how this edition from Gale Force Nine will bring the game up to date?

The Nuts And Bolts of Time of the Daleks

For players who haven’t played the 1st edition of Time of the Daleks, the good news is that the 2nd edition, currently available for preorder, contains everything from the original as well as some new goodies! So, you can start from scratch with the newest version and be all set!

Time of the Daleks is a semi-cooperative game. If this sounds odd, that’s because it is. At its core, the game is cooperative. Players will all be working toward reaching Gallifrey before the Daleks do. So, if any doctor gets to the Time Lord home-world first, the Daleks are defeated and Gallifrey is saved. The slight competitive nature of the game comes from the Doctor’s desire to be the one who gets there before the other Doctors. So technically, players are all on the same team, but there are always bragging rights that come with being the first!

This game is all about the dice. As players navigate time and space, attempting to solve dilemmas and vanquish baddies, the dice are the key. A player’s chosen Doctor, the companions they have with them, and their fancy, timey-wimey gear all combine to give bonuses to dice rolls. The better the roll, the more likely a player is to come out on top in any given dilemma. 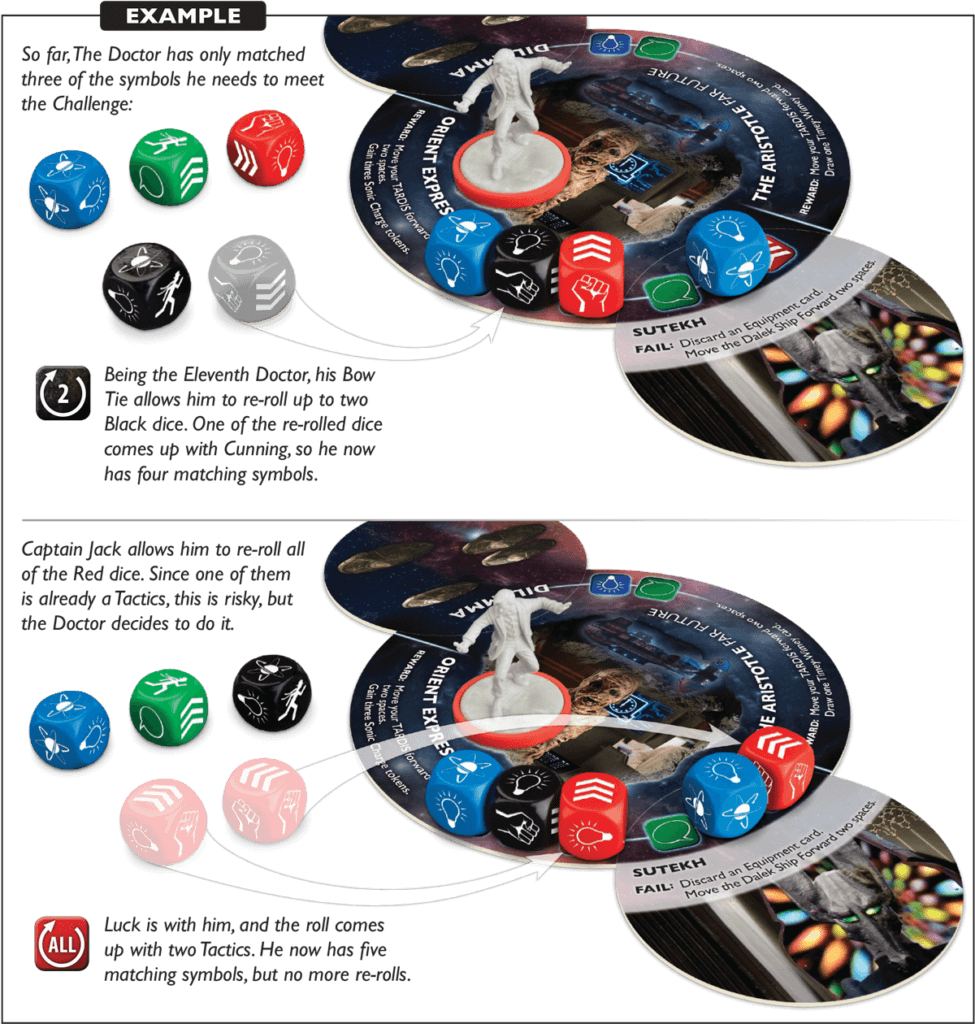 While we don’t have a lot of juicy details about potential changes to the mechanics of the game, we do know some things. Of course, the thirteenth Doctor (Jodie Whittaker) will be featured, and she’ll bring with her companions like Graham, Ryan, and Jasmin. The 2nd edition will also see a host of new locations and dilemmas for players to work through on their way to Gallifrey.

Players who already have the 1st edition of this game don’t have to fret about needing to buy a whole new edition. There is an expansion pack that adds both the 3rd and 13th Doctors, and allows for play with 5-6 players instead of 2-4. In fact, there are quite a few expansions for the game that add new Doctors, companions, locations, and more!

Time of the Daleks is from designer Andrew Haught. Haught was also the co-creator of the TV-show-inspired board game Firefly: Adventures, and Aliens: Another Glorious Day in the Corps.

Gale Force Nine published this title, but it isn’t the first time they’ve been tasked with taking a popular IP and making a great game out of it. They also unleashed the new remake of Dune to critical acclaim, and will soon drop the 2nd edition of the Dungeons & Dragons territory-control game Tyrants of the Underdark, which is currently available for preorder.

Pick up your copy of Doctor Who: Time of the Daleks (2nd Edition) today, and check out some more Game Spotlights!

Doctor Who - Time of the Daleks (2nd Edition)

Tyrants of the Underdark (2nd Edition)