Board games are great, but if they have one downside, it’s waiting for other players to take their turns. 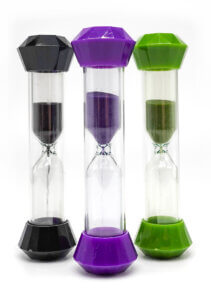 Most games are turn-based. After you take your actions, you have to wait for one, two, or three others to play before you can go again. Hopefully, they have been planning out their turns while waiting and can complete their actions quickly, but we’ve all played with that one friend who always seems to be surprised when it’s his turn again.

One of the mechanisms that made The Settlers of Catan so innovative in the 1990’s was producing resources on every person’s turn. This made opponents’ turns nearly as interesting as your own. While this helped alleviate the tedium of waiting on others, you still couldn’t actually do anything when it wasn’t your turn—and it’s usually not your turn.

If waiting on other players pushes your patience to the limit, maybe you need to try some real time games. Real time board games dispense with the idea of taking turns. Instead, all players play at the same time.

Many of these games are cooperative, with players racing against a clock to defuse bombs or save the world from disaster. Others pit player against player in a race to conquer provinces or launch torpedoes.

If you are itching to break out of the confines of turn-based games, then flip your timer, grab a handful of dice, and start rolling with our list of the best real time board games!

You and your partners have ten minutes to disarm 20 bombs in the frantic dice-rolling game Fuse, published by Renegade Game Studios and designed by Madison, Wisconsin’s own Kane Klenko.

Players alternate drawing dice from a bag and rolling them. Then they each select a die and assign it to one of their bomb cards. If they fill a card with the required dice, that bomb is defused, and they can draw another. But the clock is ticking and there’s no guarantee that the next roll will give you the dice you need.

Fuse is a fast-paced cooperative game for people who love to chuck dice. You can feel the adrenaline coursing in your veins when that timer is ticking down its final seconds and you are frantically rolling dice to find that last Blue 6 you need to save the day.

If you have a steady hand and you can take the pressure, cut the right wire with Fuse.

Kane Klenko also designed the real time entry in the Pandemic family of games. Pandemic: Rapid Response, from Z-Man Games, is a cooperative dice game for 2-4 players. You and your team fly around the world delivering food, water, and medicines to cities suffering from disasters.

Roll dice and assign them to areas of your plane to produce and deliver the desperately needed supplies. Time is running out for these cities. If the hourglass runs out three times before you complete your missions, then you fail.

Pandemic: Rapid Response requires more thinking ahead than other games on this list. Players must move their pawns around the plane to take actions, so plan carefully or you will find yourself out of position to take the right action.

Players will also need to agree on which tasks to prioritize if they want to complete them quickly and efficiently. As in the original Pandemic, prepare to lose often.

Pandemic: Rapid Response fixes one problem with Pandemic—the Alpha Gamer. This is the player who tells everyone else what to do on their turn. The action is so chaotic and unpredictable in Rapid Response that it is all but impossible for any one player to dominate.

With so many games based on conquering, killing, and destroying, it’s refreshing to play a game that rewards you for doing good and helping others. Make a positive difference in the world with Pandemic: Rapid Response.

Only have five minutes to play a game? You can play a round of 5-Minute Dungeon in that time, but you will have to play five rounds if you want to defeat the final boss and claim victory. This cooperative card game from Spin Master sends 2-5 players on a quest to defeat monsters and escape a dungeon.

Each player has a deck of cards unique to their character. They defeat a monster by playing cards from their hand that match the symbols on the monster card. Once that monster is defeated, they flip the card and fight the next one.

Players only have five minutes to make it to the end of the dungeon and defeat the boss, so they will have to play quickly, improvise, and communicate to ensure they have the cards needed to progress.

5-Minute Dungeon is a light, humorous game that is quick to play and even quicker to learn. If superheroes are more your speed, 5-Minute Marvel lets you battle villains like Red Skull and Thanos as your favorite Marvel superheroes.

Compete with other nobles for the throne of Dünya in Pendulum, from Stonemaier Games. Pendulum is a real time worker placement game. Unlike most of the games on this list, it is competitive, not cooperative.

Pendulum is also distinguished by having not one but three sand timers. Each timer controls access to a set of worker actions. Players may place workers in spots without a timer. Yet actions can only be taken when a timer is present. When the timers run out—which can take anywhere from 45 to 180 seconds—they are moved to a new location.

While there is some down time to think, that depends a great deal on your opponents. If they like to take their time, you will likely have some time as well. But if they move the timers as soon as they run out, you will be pressured to keep up.

If you enjoy the urgency of real time games, but don’t like cooperative games, Pendulum provides one of the few competitive options in the genre.

[ Captain Sonar can also be found in our Hidden Movement Games: The Best Of article ]

Stalk an enemy submarine in an underwater duel to the death. You and your crew will compete against another crew in real time in Asmodee‘s Captain Sonar.

The game is played with two teams of 2-4 players. Play with the full complement of eight players for maximum fun. Each crew member has an important role to perform.

The Captains choose the starting location for their sub and mark it on a dry-erase map. When the subs dive, they begin shouting out orders for movement. The First Mate oversees systems such as mines and drones. The Engineer tracks damage to the sub and its systems, and the Radio Operator listens to the directions given by the enemy Captain to track the enemy’s movement.

All of this happens simultaneously, with play only occasionally pausing when subs resurface to repair. The pressure mounts with all eight crew members shouting out orders and status updates. If one team can launch a torpedo and sink the enemy sub, they win.

Captain Sonar has a less complicated version titled Sonar. Sonar is like its big sibling, but it combines some of the roles and is designed for 2-4 players.

The Op‘s Cuphead: Fast Rolling Dice Game delivers on the promise in its subtitle. Based on the popular hand-drawn video game Cuphead, the tabletop version is a fast-paced boss battler.

Players work together to defeat a series of enemies and bosses by simultaneously rolling a handful of dice and matching the symbols to those shown on the boss cards to block damage and deal damage in return. 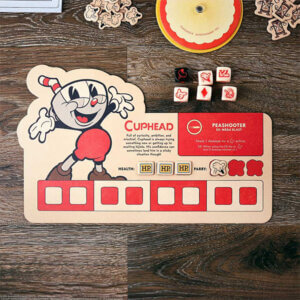 Every round is timed, and success will require rolling and assigning dice as fast as possible. As players progress, they will unlock new weapons and tougher enemies.

This is just a portion of the many real time games available today. We like the space-themed games such as Space Alert, Galaxy Trucker, and Project: ELITE. And we’d also like to give a shout-out to Magic Maze—a fun co-op real time heist game—and Pakal for those who like sliding tile puzzle games.

We still love deep, thoughtful strategy games, but sometimes you just need a fast and furious rush. When you find yourself too impatient for three hours of waiting your turn, pick up the pace with a shot of adrenaline from our list of the best real time board games.

[ Read: Rondel Games: Playing a Round ]