Noble Knight Games buys gaming products every week, and sometimes those products contain something extra. One of my favorites things to find is old character sheets. There’s just something cool about looking at someone’s old, handwritten character. In this series of articles, we analyze one of those found character sheets through thin veneer of nostalgia (with just a touch of tongue-in-cheek sarcasm).

This time, it’s a character that may have been the same trade that gave us Juhanas Booda (but I can’t be sure). Meet Karajan the assassin! 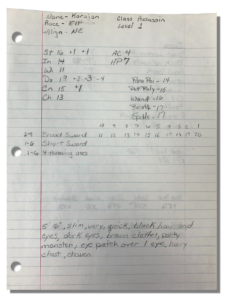 Perhaps my favorite thing about Karajan is the use of notebook paper as a character sheet. There’s something really charming about the handwritten look of it. There’s no date on this character sheet, but the class and level information marks it as AD&D 1st Edition. Karajan is a 1st level Chaotic Evil Elf Assassin.

Also, notice that Karajan has 7 hit points. That’s the maximum for a 1E assassin with a 15 Constitution. Did Karajan’s player roll max hp, or was the DM using the common “maximum hit points at 1st level” house rule? Also, what’s the deal with evil characters? This is the second character in this series with an evil alignment. My group only ever played in one evil campaign in high school, and as I recall it ended pretty quickly. Something to do with the Minotaur and the Ogre Mage deciding they’d had enough of the Drow trying to push everyone around. I won’t say which of those characters was mine.

Karajan also supports my theory that everyone’s character had at least one 18 ability score back in the day. In Karajan’s case, being an Elf boosted that 18 Dexterity into a 19. And none of his other stats is below an 11. Who needs point buy when you can just keep rolling until you get the stats you want?

Finally, it’s always worthwhile to check out the description section of these old characters. Here, the player used what almost feels like a list of bullet points:

I can’t decide if I’m more partial to the fact that very and quick are apparently separate entries, or that hairy chest is immediately followed by shaven. Does that mean Karajan normally has a hairy chest, but shaves it like a pro wrestler? Or does it mean that the elf has a hairy chest but loathes beards? And hey, do elves even have facial hair? Also, is the eyepatch necessary, or does he just wear it for that party-monster-meets-pirate affectation? I have a lot of questions.

Thanks for checking out Karajan, and thanks to the nameless gamer who inadvertently submitted him to our online rogue’s gallery. Look for more finds like this in the future, or check out some of the other entries in this series below. And, if you’re trading vintage RPG books to Noble Knight Games, don’t toss out those old characters!

Links to Other Found Sheets

Mancala is a family of similar games, rather than a game or mechanic with universally accepted rules. Variations of it have been played throughout the Middle East, India, Eastern Europe, and Northern Africa.

Drafting is a fun and popular play format to open and play new Magic: the Gathering cards. If you’ve been thinking of drafting for the first time, or you’re pondering how to improve your draft play, this guide to drafting is a great place to begin!