Noble Knight Games buys gaming products every week, and sometimes those products contain something extra. One of my favorites things to find is old character sheets. There’s just something cool about looking at someone’s old, handwritten character. In this series of articles, we analyze one of those found sheets through a thin veneer of nostalgia (with just a touch of tongue-in-cheek sarcasm). This time around, we’re looking at a character from first edition Pathfinder. Here’s the wonderfully named Alfi, the gnome sorcerer. 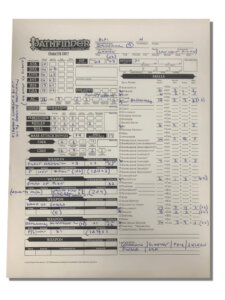 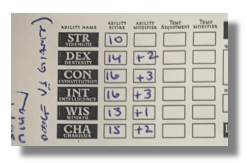 The first thing I noticed is, for the first time, we have a character who doesn’t sport multiple 18s. If my math is correct, Alfi’s player spent 23 points on stats, depending on where he or she put the bonuses for leveling up. That’s somewhere between high fantasy and epic fantasy. So, a powerful set of stats, but not the world beaters we’ve seen in this series.

Also, I have to give credit to Alfi’s player for writing the character sheet in pen. I’ve been playing RPGs for a long time, but I’m a mechanical pencil sort of guy. Like doing the crossword puzzle with a sharpie, filling in your character sheet in pen is a brave move, especially a fairly crunchy game like Pathfinder. As to the character itself, what first stands out for me is Alfi’s combination of weapons.

Alfi uses a +3 frost dagger paired with a staff of fire for a nice fire and ice sort of vibe. If those don’t do the trick, Alfi has a +1 returning minidagger, which I’m convinced he keeps hidden in a boot. A last resort, throwable spike for when the baddies take away your staff and magic dagger is very tricksy. Also, the note under the staff of fire says “walking stick.” Alfi is clearly the kind of gnome who believes in the value of surprise.

Here’s an observation: Alfi speaks six languages. This is a common thing in most versions of D&D / Pathfinder. I get that the average campaign world is a very cosmopolitan place, but fluently speaking six languages is quite a feat! And Alfi isn’t even a particularly language-focused character.

I know that I’m picking a nit in a game that includes elves and fireballs and such, but isn’t it a little weird that everyone in RPG land is not just multilingual, but impressively multilingual? It’s an odd little thing that holds true for most versions of D&D, Pathfinder, and the like.

Thanks for checking out Alfi, and thanks to the nameless gamer who inadvertently submitted this character to our online rogue’s gallery. Look for more finds like this one in the future. If you’re trading vintage RPG books to Noble Knight Games, don’t toss out those old characters- we love them!

Links to Other Found Sheets