Cry Havoc Fan‘s Diex Aie 2: Return of the Danes will be releasing very soon and you can secure a preorder now! 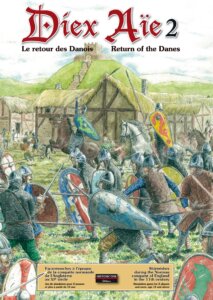 Diex Aie 2 places us in England just after the battle of Hastings in the second half of the 11th Century. It depicts the numerous fights that the Saxons fought to resist the “Norman Yoke.” This release is a campaign game: It is used to generate tactical scenarios which are played on the standard maps of the series.

Diex Aïe! Latin for “God helps,” was the warcry of the Duke of Normandy.

Diex Aie 2 includes everything from the original game, and adds:

The 4 playable factions are displayed through counters using the Outremer/Croisades format. A 3-letter marking system makes the various playing pieces easy to identify on the maps.

The Motte & Bailey map displays a wooden tower on top of a motte, overlooking a small bailey with buildings, surrounded by a wooden palisade and moat. Players position buildings to simulate a small village on the Woodbridge map. A marshy bottom is a challenging obstacle for cavalry to cross on The Ditch. The Saxon Village is a new map which consolidates the various building overlays which were provided with the first version of the game.

Preorder your copy of Diex Aix 2: Return of the Danes today!

Diex Aie 2 - Return of the Danes