Cape May by Thunderworks Games: Released

America’s oldest seaside resort, Cape May, New Jersey, has been a popular getaway for families from New York City, Philadelphia, and Washington, D.C. since the late 1700s. But Cape May was never immune to hardship.

Wracked by devastating fires, extreme beach erosion, swarms of mosquitoes, and intense competition from surrounding areas, the town and its residents struggled their way through the 19th and 20th centuries. During this turbulent time, players attempt to develop Cape May into the “Queen of the Seaside Resorts.” 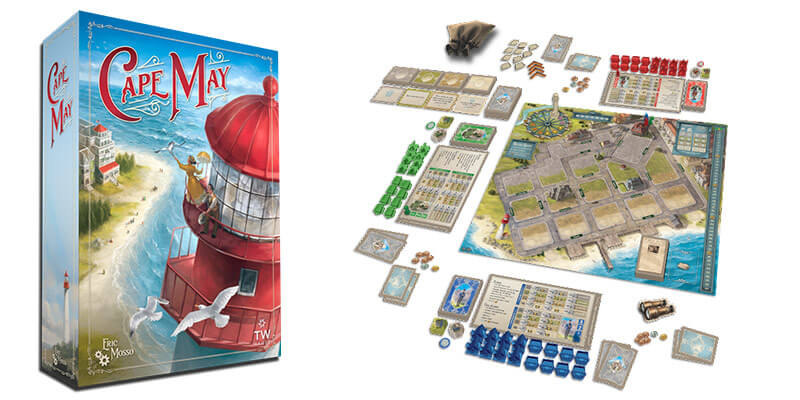 The Gist of Cape May

Each player is a property developer, tasked with rebuilding Cape May. The players will travel the map amassing wealth and prestige. The structures they develop will beautify the Cape May community through the construction of cottages, Victorian homes, and historic landmarks.

Balancing income, development, movement, and personal goal completion will ensure that the winner’s name will be written in the history of Cape May for all time! Watch the Featured Video above for a deeper dive, or read onward for even more!

The Anatomy of a Round

Starting with the first player and moving clockwise around the table, each player takes three actions on their turn. Actions include:

At the end of spring (round 3), summer (round 6), and fall (round 9), each player draws two cards from the activity deck and gains money equal to the position of their income token on the income track.

If twelve rounds have been completed, proceed to “Game End”. Otherwise, advance the lighthouse mini one space clockwise on the round wheel, and give the first player token to the next clockwise player.

Cape May is somewhat unexpected from publisher Thunderworks Games. They are best known for their fantasy dice-drafting Roll Player adventures. While fantasy themes are a strong suit for them, they’ve proven that they can do well when they step outside their comfort zone. Cape May is evidence that Thunderworks isn’t afraid to try new things and their ambition is paying off!

[ Pick up your copy of Cape May by Thunderworks Games today! ]

[ See our Publisher Spotlight and interview with Keith Matejka of Thunderworks Games! ]