There is a treasure trove of incoming war games right now, and today we’re featuring three war game preorders. Reserve your copies now before they’re all snatched up! 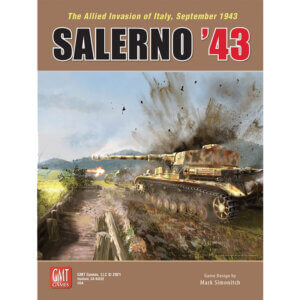 GMT Games’ plan is to make this the first in a 3-part series that takes the U.S. 5th Army to Cassino and Rome.

Salerno ‘43 is a regiment/brigade-level game on the Allied invasion of mainland Italy in September 1943. Two British and two American divisions land in the Bay of Salerno defended by the full strength 16th Panzer Division. The 16th is soon reinforced by five other German mechanized divisions.

For 8 days, the survival of the beachhead is in doubt. Emergency measures are taken to reinforce the beachhead with the 82nd Airborne Division. With their counter-attack stopped and the British Eighth Army approaching from the south, the Germans withdraw their left flank to avoid being trapped. However, their right flank stubbornly holds back the British from pushing north to Naples.

Salerno ’43 includes two scenarios: an 8-turn Invasion Scenario and a 24-turn Campaign Game. In the Campaign Game, the Allies must exit the north map edge by the end of September 1943. The Germans must delay the Allies to give time for the construction of the Gustav Line further north. The 8-turn scenario can be finished in an afternoon. 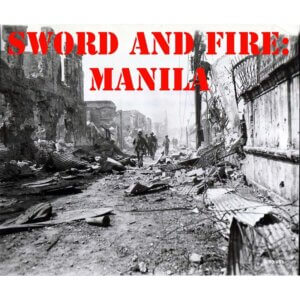 Manila, on the Philippine island of Luzon, was known throughout the world as “The Pearl of the Orient” for its lush gardens, modern buildings, and vibrant nightlife.

It was also a strategically critical naval base, featuring the largest deep-water port in the Pacific. With the fall of the Philippines in 1942, the Japanese turned Manila into an enormous supply depot. The city served as a hub from which supplies could be shipped to bases across the Pacific, all under Japanese rule.

After more than two years of brutal Japanese occupation, General Douglas MacArthur “returned” to the Philippines in October 1944 at Leyte Gulf. In January 1945, the Americans invaded Luzon. They reached the outskirts of Manila in the first week of February and prepared to assault the city. The Japanese commander of Manila, Admiral Sanji Iwabuchi, had no grand plan for victory—just a fight to the death, taking as many American lives as possible.

Sword and Fire: Manila features rules for the city’s unique terrain types: Multi-Material, Adobe, Steel-Walled Buildings, Stone Monuments, Bomb Craters, the many detailed elements of Intramuros, and a host of others. The game has twenty-five scenarios and five Campaign Games (CG) ranging in size from 6-15 CG Dates. The scenarios are played out on six map sheets depicting the city. 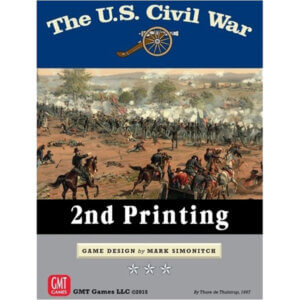 The U.S. Civil War is a 2-player strategic-level war game of the American Civil War. The game covers the entire war from 1861-65 on a large 30” x 44” map area (2 mounted maps) of the Southeastern United States. Turns represent 3 months during the winter and 2 months during the summer, with four Action Phases to each turn.

Players of Eric Lee Smith’s The Civil War (VG) and Mark Herman’s For the People (AH and GMT) will see many similarities between this game and those two benchmark games. Those two wonderful games inspired many of the rules and concepts used in this game.

This War Without an Enemy