Forbidden Games—the team behind the wildly successful Raccoon Tycoon—is back with an equally playfully-named second game in the series: Lizard Wizard!

Astoria is a land pulsing with magic and intrigue! A handful of Arch-Mages are vying for the loyalty of wizards across the land so that they can wield ultimate power.

In Lizard Wizard, players compete to recruit wizards from seven unique schools of magic, build mystical towers, research powerful spells, summon helpful familiars, and search dark dungeons for gold and items of power. Only one Arch-Mage will rise above the rest and control the land. Will it be you?

The Gist of Lizard Wizard 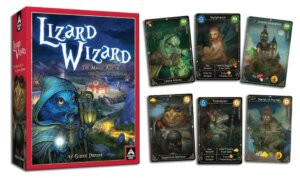 Lizard Wizard is an action selection game. Every turn will be filled with delicious tension, as you decide which of six possible actions you will use to increase your power. 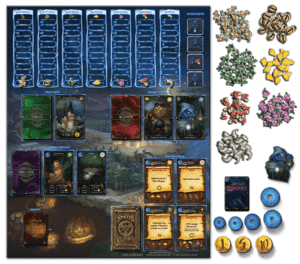 At the end of the game, you will receive points for having the best wizard and tower combinations, gold, and scoring spells.

[ Pick up a copy of Lizard Wizard ]

Board games and emotional intelligence seem like two totally separate topics, but your tabletop can be a training ground for your mental health! Teach your brain healthy habits while you move your meeple!

Freshly into its second edition from Mongoose Publishing, Traveller has come a long way from its humble beginnings in the late 70s. Create spacecraft, visit alien worlds, and adventure across the universe in this sci-fi roleplaying game.