Back in 2011, game designer John Welch released the original Keep Up the Fire solitaire war game. It was a part of the States of Siege series from publisher Victory Point Games. In the wargame genre, 2nd Editions of games are rare, but Worthington Publishing reached out to Welch and he was more than happy to revamp and upgrade his Boxer Rebellion simulation! 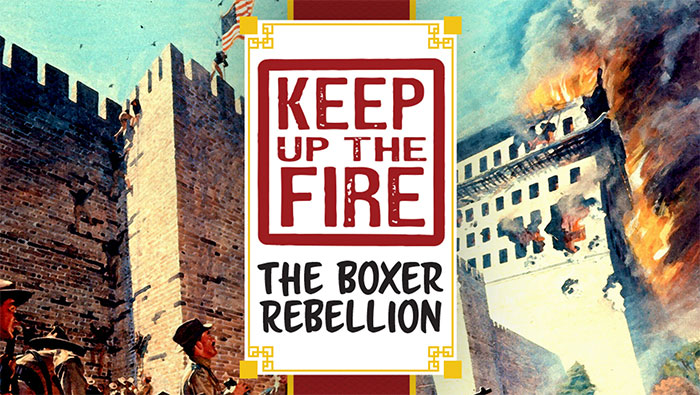 The New & Improved Keep Up the Fire

This isn’t just a simple re-release of the first edition of this Peking (Beijing), China defense game. Welch and his team have made some significant changes to the appearance and the gameplay.

The now board-mounted game map is considerably larger than its paper predecessor. It also features a more artistic, isometric view of the Legation space. This board is where the player will track their Legations’ strength as well as that of the Chinese attackers.

The entirely new Eight-Nation Relief Army map allows players to control and track the progress of the forces coming to their rescue. The victory conditions require that the relief army occupies the Peking space of this map.

The physical components of the game also got a quality upgrade. This means high quality counters and cards!

The Event Cards showcase some of the historical moments that took place during the siege of Peking. These cards come in two flavors.

One type works against the player; providing an obstacle that the player must overcome ASAP.

The other type is a boon to the player. These cards can be kept and deployed at strategically helpful moments to allow the player to overcome difficult odds!

Headline Cards are the main driver of the game. These come with some flavor text at the bottom to give you the historical context of the situation. Among other things, these cards will control your enemies: the Chinese units laying siege, and the Chinese forces opposing the progress of the relief column attempting to rescue you.

Two new mechanics, Keep Up the Fire and Heroic Effort, are significant investments on the part of the player, but can really pull them out of a tight spot if used at the right time!

Being a history teacher, Welch has used his game in educational settings. The game provides a great opportunity for multiple players to play as a democratic force, collectively deciding what actions to take and dealing with the consequences. It may be a solitaire game at heart, but it can be enjoyed by any number of players wanting a great, tactical wargaming experience!

Preorder your copy of Keep Up the Fire’s new edition today to secure a box! It’s currently scheduled to release this September!

Also check out our collection of other solo games, or browse our wargames collection!

Read about the Rise of Solo Play Games!

Keep Up the Fire

Keep up the Fire! - The Boxer Rebellion, June to August 1900