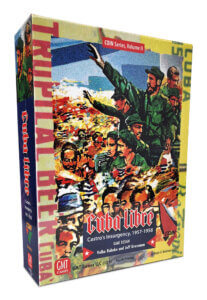 Castro’s Marxist “26 July Movement” must expand from its bases in the Sierra Maestra mountains to fight its way to Havana. Meanwhile, anti-communist student groups, urban guerrillas, and ex-patriots try to de-stabilize the Batista regime from inside and out, while trying not to pave the way for a new dictatorship under Castro.

Batista’s Government must maintain steam to counter the twin insurgency, while managing two benefactors: its fragile US Alliance and its corrupting Syndicate skim. And in the midst of the turmoil, Meyer Lansky and his Syndicate bosses will jockey to keep their Cuban gangster paradise alive.

GMT Games‘ Cuba Libre will be easy to learn—especially for Andean Abyss players—as both volumes share the same innovative COIN system. Like COIN Volume I, Cuba Libre is equally playable solitaire or by multiple players up to 4. It also has a shorter completion time than Andean Abyss. But Cuba Libre’s situation and strategic challenges will be new. A deck of 48 fresh events brings 1950s Cuba to life and includes:

Cuba Libre provides up to 4 players with contrasting roles and overlapping victory conditions for rich diplomatic interaction. For 2- or 3-player games, players can represent alliances of factions, or the game system can control non-player factions . Or a single player as the Cuban Revolutionaries can attempt to topple Batista and seize power for themselves. The non-player sides will fight one another as well as the players, but too much power in the hands of any one of them will mean player defeat.

Pick up a copy of the latest printing of Cuba Libre today!

The Dark is a solo tabletop roleplaying game about being lost in a darkness that seeks to overtake you, and your desperate clinging to the memories of those you loved.