Clash of Sovereigns: The War of the Austrian Succession 1740-1748

Young King Frederick II leads the army of upstart Prussia in a surprise invasion of Austrian Silesia. He hopes for an easy conquest of the rich province at a time when the Austrian Empire appears vulnerable following the death of Charles VI, King of Austria and Holy Roman Emperor.

Despite internal opposition to the “Pragmatic Sanction” that allowed a woman to inherit the throne, Austria’s new Queen—Maria Theresa—is cowed neither by Frederick, nor by France’s scheme to place a Bavarian puppet candidate on the throne of the Holy Roman Empire, nor by Spanish designs on Austria’s holdings in Italy.

Amid these conflicting dynastic ambitions, Frederick’s local territorial coup proves to be only the opening act in a major European war that none of the great powers had anticipated – but all wished to profit from. It would ultimately span eight years and half the globe.

Clash of Sovereigns, GMT Games’ 2-4 player card-driven game of the War of the Austrian Succession, has been 9 years in the making. It is a free-wheeling, faster-playing, stream-lined “nephew” of the widely-regarded Clash of Monarchs, also by game designer Bob Kalinowski. Bob candidly told us, “It [Clash of Sovereigns] is no doubt the best game I’ve ever done — and probably my last.” (We look forward to an interview with Mr. Kalinowski, coming soon!)

The Bourbon (French, Spanish, Prussian) and Pragmatic (Austrian, British) alliances battle across central Europe from Paris to Konigsberg and Naples to London. Each year is divided into five ‘seasons’ (Late Winter, Spring, Summer, Fall, and Early Winter). Play moves quickly since major campaigning is restricted to the Summer and Fall, and each power will typically activate only 1-3 forces per season. Certain event cards allow limited campaigning in the Early and Late Winter seasons as well.

Each card has a Campaign Point (CP) value, which may be expended to activate Leaders and the armies they command, to perform Administrative Marches, and to conduct raids with irregular Croat/Hussar light troops (Austrian player only). Each leader has an Activation Point (AP) rating, which allows him to move, fight battles, and conduct sieges. This system produces historically valid outcomes and a rich narrative while keeping the pace of play brisk.

Clash of Sovereigns features asymmetrical armies with distinctive national characteristics and capabilities that have banded together in alliances that often struggle with conflicting goals. Both the Bourbons and Pragmatics will benefit – or suffer from – interactions among the various nations in their respective alliances.

The French player controls the largest, best-led army on the continent but is constrained by its limited logistical reach, King Louis XV’s quirks and maladies, court intrigue, and periodic pressure from his Spanish ally. France will welcome the Pr/Span player’s powerful Prussian army lancing into the Austrian heartland in early/mid game but chafe under Spanish demands for cooperation and campaigning in Italy – the only place the Spanish can hope to gain the VPs necessary for victory.

The Prussian/Spanish player is both blessed and cursed. In Prussia, he has a powerful army, Frederick’s excellent generalship, and clear objectives. Yet the politically naive Frederick can be “played” into neutrality – or out of the war completely – by wily Austrian diplomacy. Spain itself has an excellent but undersized army that so depends upon French support that the French player decides when Spanish forces will be activated for the Pr/Span player to campaign with! In order to win, the Pr/Span player needs either a Decisive Prussian victory (rare) or for both Prussia and Spain to achieve lesser levels of victory. Thus, the Prussian “frere” of 1740-1745 may become a great nuisance in 1745-1748!

The Pragmatic allies must weather the early war storms of 1740-1742, get their feet under them, and somehow gain traction to push back their powerful French and Prussian foes. They are equal to the task. The Austrian army has solid leaders and its unique Croat/Hussar light troops, which devastated enemy supply lines throughout the war, leaving French and Prussian commanders bewildered and their armies starving. Maria Theresa’s army can prevail against the French and Prussians – if it’s robustly financed to achieve maximum strength. For this, the Austrian player must rely upon the good will and immense financial resources of the Br/Pied player.

Britain & the Kingdom of Piedmont

The British/Piedmontese player has the most subtle, difficult—and most important—role in the game. He has a high-quality British/allied army, but it is small, led by indifferent leaders, and can generally be augmented only by low-quality Dutch troops since Austria will have its hands full fighting elsewhere. Yet this mediocre, polyglot army is often the primary protector of the VP-rich Austrian Netherlands against the mighty French Marshal De Saxe! The British player must also selflessly prop up his allies by playing subsidy (reinforcement) cards, which are essential for Austria’s survival and ability to launch counteroffensives in the mid and late war periods. But the British player has a powerful fleet and, if he (literally) plays his cards right, can use it to cut off France from its overseas resources, starving it of reinforcements in the critical late war years.

The British player also controls the Kingdom of Piedmont and can win the game only if it too achieves some level of victory. Piedmont occupies a central position in Northern Italy that sits astride the routes running to the VP-rich areas in Naples and southern France and is itself the chief region where the Pr/Span player can harvest VPs. The Austrians can accomplish little in Italy without the Pieds’ help, and vice versa – though they both covet the same Victory Point objectives! So if the Austrian player wants all those subsidy cards played, he may have to help Piedmont achieve its VP objectives, send more Austrian troops to defend the Netherlands, and share late war opportunities to grab VP spaces on the French-Germany border with the British.

How Will It Play Out?

COS’s replay value is high because the multiplicity of belligerents and theaters of operation ensure that the game will never play the same way twice. Vienna may fall to the Prussians or French; Paris and Naples may see Austrian white uniforms in their streets; and London may be beset by Bonnie Prince Charlie – or invading French troops. Will the French get Bavarian Charles VII onto the throne of the Holy Roman Empire? Can Marshal Traun and Austrian Croats take it back? Will Louis XV and George II clash in Flanders? And will anyone be able to stop De Saxe? — Find out! 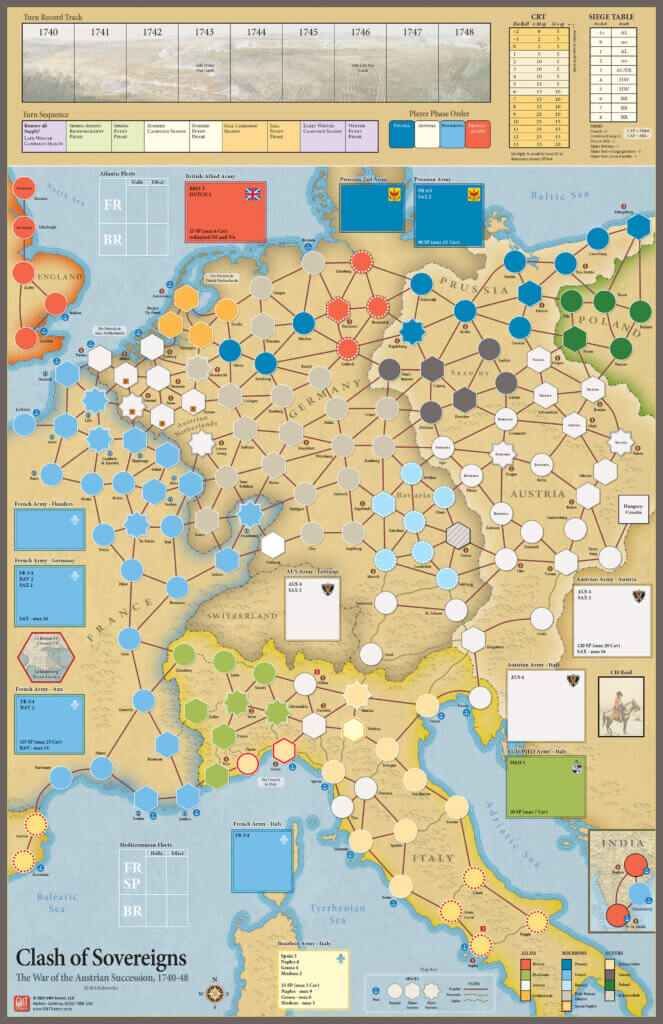 Preorder your copy of Clash of Sovereigns: The War of the Austrian Succession 1740-1748 today!

Clash of Sovereigns - The War of the Austrian Succession, 1740-48

Fire in the Lake - Insurgency in Vietnam (3rd Printing)