Today we bring you our Top 5 Deck-Building Board Games—including map/game board!

Ever since Rio Grande Games‘ smash hit Dominion introduced deck-building in 2008, the genre has grown in popularity, inspiring games like Ascension and Star Realms. Like Dominion, these are strictly card games, but as the deck-building mechanic has matured, other genres of tabletop games have incorporated it.

These games are deck-building card games at heart, but add an extra dimension by including a board depicting a dungeon, solar system, or the coast of France. These maps give the game a sense of physical space and movement. Players now have a territory to explore or develop.

A map also adds more player interaction beyond forcing opponents to discard cards or take damage. When cards are used to move pieces around a board, those pieces—whether they are explorers, riflemen, cowboys, or trains—interact with those of other players, ratcheting up the conflict. And the fun!

If you love deck-building games, but you are also looking for more interaction among players, then check out any of the games on our list of the 5 best deck-building board games that include a map or board. 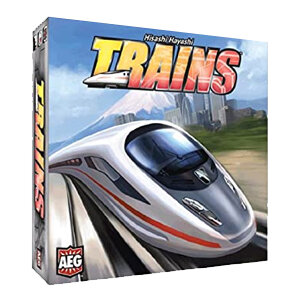 In Alderac Entertainment Group‘s Trains, you use deck-building to build a railway network in Japan. In addition to buying better cards for your deck, you will build train stations and lay rail on the double-sided map board, connecting cities on either the Tokyo or Osaka maps.

Expanding your rail network brings you into competition with other players, who would also like to build into Kyoto. You can’t stop them from building into your city, but you can make it more expensive for them—perhaps so expensive they will leave Kyoto and its victory points all to you.

As in Dominion, cards are purchased from a randomized common supply. Every game has 16 decks available and there are almost 40 in the game, so every game offers new options.

What makes Trains stand out among deck-builders is that all this railroading industry produces waste. When you lay rail or build stations, you also add Waste cards to your deck. Waste cards do nothing but clog your deck with useless cards. Removing cards from your deck is as important as adding cards.

Get on board Trains if you enjoy railroading games and the challenge of creating the leanest, most efficient deck possible. 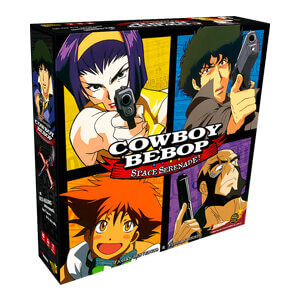 [ While Japanime Games hasn’t printed this game in some time, we’ve heard directly from them recently that a run is planned for early 2022! Add it to your Wantlist to get notified immediately when it’s in-stock! ]

Cowboy Bebop: Space Serenade from Japanime Games is a semi-cooperative game for 1-4 players based on the classic anime series (now a live action series on Netflix). Play cards to generate resources and to move your bounty-hunting miniature from planet to planet in pursuit of criminals. You will have to work together to weaken these outlaws, but you will earn extra renown when you make the collar.

Each character has unique special abilities, but when you occupy the same planet as an opponent, you have the option to use their ability.

The ultimate goal is to capture the arch-criminal Vicious. If he escapes, the player with the most renown is still the winner, but it is a hollow victory. Do better next time.

Hunt down Cowboy Bebop: Space Serenade if you are a fan of the anime series and you enjoy cooperative games—but you still want to win! 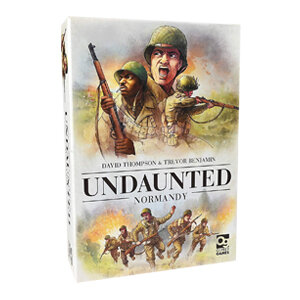 Osprey Publishing‘s 2-player deck-building war game Undaunted: Normandy is set during the allied invasion of France in World War II. The “board” is created by laying out terrain tiles as dictated in one of the 12 scenarios provided in the game. Each scenario has its own victory objective, which may be different for the U.S. player and the German player. A deck of cards represents an army, and each card represents a unit.

Command a unit on the board by playing its unit card from your hand and choosing one of its available actions. Play a Scout card to move a scout into new territory, paving the way for riflemen to follow. Or command a unit of riflemen to attack an enemy mortar team on a nearby tile. Command cards are played to inspire units to take more actions or to add cards from the supply to the player’s deck.

Unlike most deck-building games, the supply is unique to each player. You cannot take cards from your opponent’s supply, but you can take a Conceal action and force them to add a useless Fog of War card into his or her deck.

When units take damage from attacks, a card matching that unit type is removed from the game. If all cards of that type are removed, the unit is defeated.

Undaunted: North Africa is the second game in the Undaunted series, pitting British commandos against Italian forces in North Africa.

Scout out Undaunted: Normandy if you love the idea of a card-driven war game. 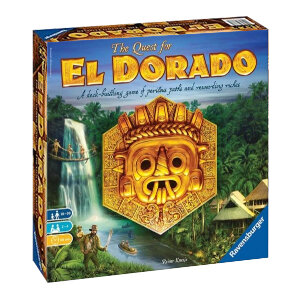 The Quest for El Dorado from Ravensburger Games is one of the best examples of a deck-building game that includes movement on a board. Play as an explorer racing to reach the fabled city of El Dorado. Cards advance your meeple into new terrain hexes matching the type of card played. Play a machete card to move through the jungle or a paddle card to venture onto a lake hex. Coin cards allow you to enter villages or to buy new cards from the market. You will need better cards to pass your opponents and secure the riches of El Dorado for yourself.

The mechanics in The Quest for El Dorado are highly thematic and easy to teach, making this a good choice for new gamers and family game nights. Hex tiles can be rearranged to increase replayability.

Join The Quest for El Dorado if you enjoy a light-weight adventure that is easy to teach and share with others. 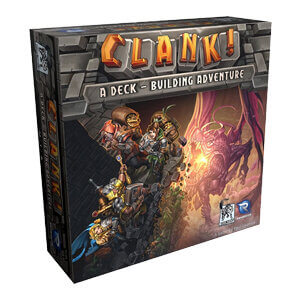 Our pick for the number one deck-building game that includes a map is Clank! A Deck-Building Adventure.

We are including the entire extended family of games in the Clank! A Deck-Building Adventure series. This includes the original Clank!, the sci-fi version, Clank! In! Space!, their many expansions, and a legacy campaign, Clank! Legacy — Acquisitions Incorporated.

Clank! is a dungeon-diving game in which players assume the roles of adventurers looking for loot. Moving about the dungeon makes noise—clank—and making too much clank will awaken the dragon, spelling doom for anyone who can’t reach the surface in time.

Players build their decks with new cards acquired from a replenishing market. New cards will allow them to move or fight or buy more expensive cards. Players explore the dungeon by moving their meeples around the board, fighting monsters and discovering treasures. Play three boots on your turn and you can move three spaces. Play two swords and you can defeat a monster with two health.

Clank! tops this list because of the close connection between what happens on the board and the cards you play. Your cards dictate your activities on the board. If you don’t play movement cards, you won’t be moving on that turn. Buying too many combat cards will make it easier to defeat monsters, but if you can’t move, that won’t do you much good.

Delve into Clank! A Deck-Building Adventure if you can never have enough loot. It tops our list of the best deck-building games that include a board!

Lost Ruins of Arnak, Great Western Trail, and Dune: Imperium are among the most popular games released in recent years. They involve some deck-building and a board, but deck-building is just one mechanic among many, including a heavy dose of worker placement, which is why they did not make this list. All three are great games, though, and highly recommended.

It is encouraging to fans of deck-building to see the mechanic making its way into more board games. We look forward to more deck-building board games that include a map to explore and treasures to discover!

Quest for El Dorado, The